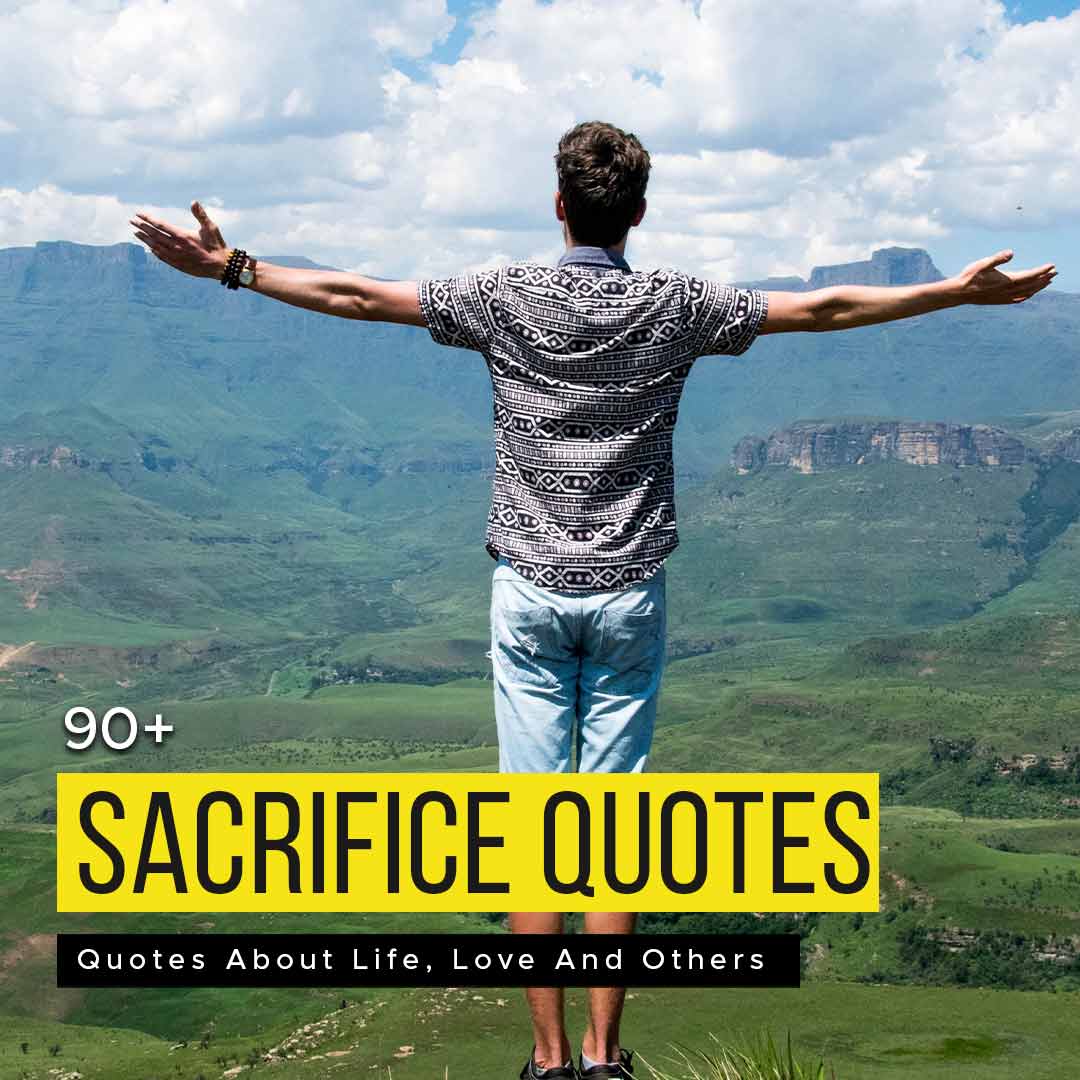 If you want to build a good body, then you have to sacrifice bad or fast food. That is, to gain something, it is necessary to sacrifice something.

Parents sacrifice their lives to give a good life to their children. Sacrifice is an essential part of success.

In this article, we will read some quotes and sayings related to sacrifice.

“Great achievement is usually born of great sacrifice, and is never the result of selfishness.”

“Success is no accident. It is hard work, perseverance, learning, studying, sacrifice and most of all, love of what you are doing or learning to do.”

“I knew I had to make a sacrifice to do what I’ve always wanted to do.”

“It is a clear gain to sacrifice pleasure in order to avoid pain.”

“Life is only a long and bitter suicide, and faith alone can transform this suicide into a sacrifice.”

“People sacrifice the present for the future. But life is available only in the present. That is why we should walk in such a way that every step can bring us to the here and the now.”

“It is not sacrifice if you love what you’re doing.”

“Sacrifice is the surrender of that which you value in favor of which you don’t.”

“Truth often sacrificed for the sake of stability and peace.”

“The most amazing philanthropists are people who are actually making a significant sacrifice.”

“Follow your passion, be prepared to work hard and sacrifice, and, above all, don’t let anyone limit your dreams.”

“It’s what you let go of that determines how high you fly.”

“When you make the sacrifice in marriage, you’re sacrificing not to each other but to unity in a relationship.”

“And all those who had believed were together and had all things in common; and they began selling their property and possessions and were sharing them with all, as anyone might have need.”

“So Christ was sacrificed once to take away the sins of many; and he will appear a second time, not to bear sin, but to bring salvation to those who are waiting for him.”

“So then, none of you can be My disciple who does not give up all his own possessions.

“Truly, truly, I say to you, unless a grain of wheat falls into the earth and dies, it remains alone; but if it dies, it bears much fruit. “He who loves his life loses it, and he who hates his life in this world will keep it to life eternal.”

“Sacrifice does not mean the rejection of the worthless, but of the precious”

“For whoever wants to save their life will lose it, but whoever loses their life for me will save it.”

“Abba, Father,” he said, “everything is possible for you. Take this cup from me. Yet not what I will, but what you will.”

“I would rather be alone with dignity than in a relationship that requires me to sacrifice my self-respect.”

“Love doesn’t please itself by seeking revenge. Love sacrifices itself for the good of others.”

“To be able to throw one’s self away for the sake of a moment, to be able to sacrifice years for a woman’s smile, that is happiness.”

“There is no success without sacrifice.”

“Great achievement is usually born of great sacrifice, and is never the result of selfishness.”

“Let us sacrifice our today so that our children can have a better tomorrow.”

“Without pain, without sacrifice, we would have nothing.”

“Success is no accident. It is hard work, perseverance, learning, studying, sacrifice and most of all, love of what you are doing or learning to do.”

“You can’t achieve anything in life without a small amount of sacrifice.”

“When you make the sacrifice in marriage, you’re sacrificing not to each other but to unity in a relationship.”

“There’s only one effectively redemptive sacrifice, the sacrifice of self-will to make room for the knowledge of God.”

“If we can sacrifice something comfortable, that we’re too good at, that might even be holding us back, we’ll have more room to grow into the person we want to be.”

“If giving my everything is what it takes, I won’t hesitate, not for even a second. That’s what it means to have something you’d give your life to keep safe.”

“When you go in search of honey, you must expect to be stung by bees.”

“I’d rather spend the rest of my life without ever seeing you again, than watch them destroy you because of me.”

“Every job will demand some sacrifice. The key is to avoid unnecessary sacrifice.”

“The law of sacrifice is uniform throughout the world. To be effective it demands the sacrifice of the bravest and the most spotless.”

“I’m willing to walk in darkness if it keeps humans in the light.”

quotes about sacrifice for others

“When you know who matters most to you, giving things up, even yourself, doesn’t really feel like a sacrifice.”

“Never do a wrong thing to make a friend or keep one; the man who requires you to do so is dearly purchased at a sacrifice.”

“You can sacrifice and not love. But you cannot love and not sacrifice.”

“Follow your passion, be prepared to work hard and sacrifice, and, above all, don’t let anyone limit your dreams.”

“Sacrifice is a part of life. It’s supposed to be. It’s not something to regret. It’s something to aspire to.”

“One life is all we have and we live it as we believe in living it. But to sacrifice what you are and to live without belief, that is a fate more terrible than dying.”

“A team will always appreciate a great individual if he’s willing to sacrifice for the group.”

“November is Native American Heritage month, and a good time to honor the legacy of our ancestors, but every day we should stop to think about our country’s beginning and that the United States would not exist if not for a great deal of sacrifice, blood, and tears by Indian Tribes across the country.”

“If you’re enjoying these quotes, make sure to check out our collection of wise native American quotes on community, respect, and more.”

“The journey has definitely not been easy, but all the sacrifice has paid off very well in terms of my performance on-court.”

“The willingness of America’s veterans to sacrifice for our country has earned them our lasting gratitude.”

Quotes about sacrifice for love and life

“Dreams do come true, if we only wish hard enough, You can have anything in life if you will sacrifice everything else for it.”

“Brotherhood means laying down your life for somebody, really willing to sacrifice yourself for somebody else.”

“There is no moral authority like that of sacrifice.”

“Too long a sacrifice can make a stone of the heart. O when may it suffice?”

“True love is selfless. It is prepared to sacrifice.”

“Let us sacrifice our today so that our children can have a better tomorrow.”

“Your competition is not other people but the time you kill, the ill will you create, the knowledge you neglect to learn, the connections you fail to build, the health you sacrifice along the path, your inability to generate ideas, the people around you who don’t support and love your efforts, and whatever god you curse for your bad luck.”

“You can’t achieve anything in life without a small amount of sacrifice.”

“Teamwork requires some sacrifice upfront; people who work as a team have to put the collective needs of the group ahead of their individual interests.”

“If you’re enjoying these quotes, you’ll love our collection of team quotes that will inspire you and your teammates to collectively meet your goals.”

“Love proves itself by deeds, so how am I to show my love? Great deeds are forbidden me. The only way I can prove my love is by scattering flowers, and these flowers are every little sacrifice, every glance and word, and the doing of the least actions for love.”

Don’t Miss These Happy Quotes | For Friends, Mother, And Many More

Best 120+ Nothing Is Impossible Quotes | Believe In Yourself

120+ Vulnerability Quotes That Will Make Your Life Happy