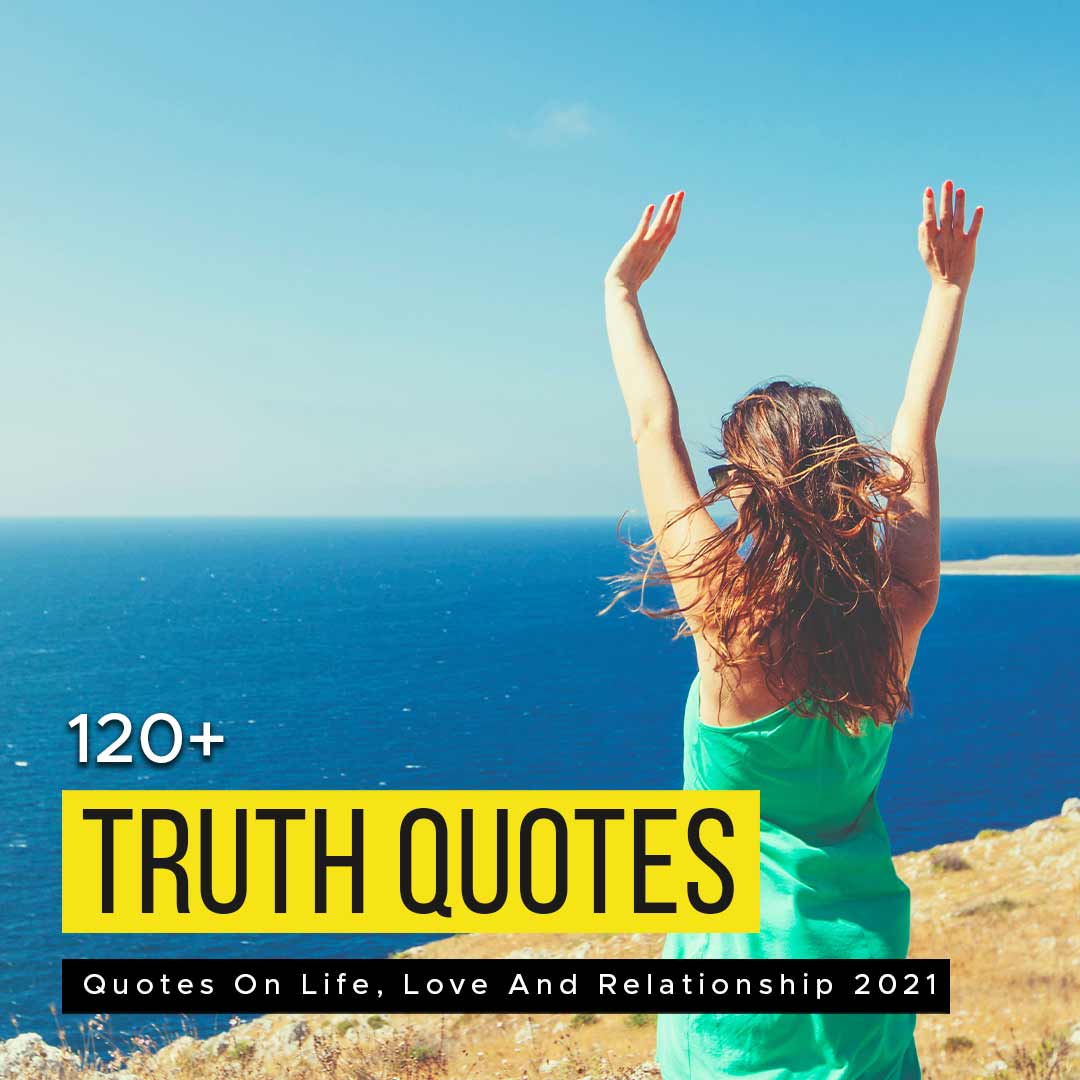 Truth Quotes On Life | It is said that the most significant advantage of telling the truth is that you do not have to remember anything. Many types of people come into our lives, some are true, and some are deceitful.

A person needs to be truthful in his own eyes. Do you know how to recognize a person, whether they are honest or not? The attitude and behavior of the one who is false will be slightly changed. They will start showing off. But a genuine and honest person does not have to do all this.

We all should be as faithful as possible in our life and focus on our work.

Whether you do something in life or not, people will speak wrong about you. There has not been a single person in this world about whom no one would have said anything wrong. Every person has pain; every person feels insulted at some point in time.

If a person is trustworthy, he should not feel bad because he knows what the truth is.

In this article, we will read such quotes about truth related to life.

“If you tell the truth, you don’t have to remember anything.”

“Truth is like the sun. You can shut it out for a time, but it ain’t goin’ away.”

“It is only with the heart that one can see rightly; what is essential is invisible to the eye.”

“A lie gets halfway around the world before the truth has a chance to get its pants on.”

“All truths are easy to understand once they are discovered; the point is to discover them.’

“If you tell the truth, you don’t have to remember anything.”

“Some people think that the truth can be hidden with a little cover-up and decoration. But as time goes by, what is true is revealed, and what is fake fades away.”

“Those who know the truth are not equal to those who love it.”

“In a time of deceit telling the truth is a revolutionary act.”

“Once you eliminate the impossible, whatever remains, no matter how improbable, must be the truth.”

“Betrayal is the only truth that sticks.”

“Truth is stranger than fiction, but it is because Fiction is obliged to stick to possibilities; Truth isn’t.”

“Rather than love, than money, than fame, give me truth.”

“Those who know the truth are not equal to those who love it.”

“He who has truth at his heart need never fear the want of persuasion on his tongue.”

“We go wrong when we don’t admit the unknowable complexity of reality, but we go dangerously wrong when we claim that one pale story—or an anthology of them—is truth.”

“To be Jedi is to face the truth, and choose.”

“I am ignorant of absolute truth. But I am humble before my ignorance and therein lies my honor and my reward.”

“Jokes? There are no jokes. The truth is the funniest joke of all.”

“Truth is the property of no individual but is the treasure of all men.”

“Life goes on, and the truth changes; this just happens to be the way life is. What was once true is often no longer true just a little while later.”

“In a time of deceit telling the truth is a revolutionary act.”

“If you shut up truth, and bury it underground, it will but grow.”

“Peace if possible, truth at all costs.”

“There is nothing more deceptive than an obvious fact.”

Devotion requires a willingness, openness and readiness to embrace the truth. It is a process of opening yourself to receive what already is. God’s goodness and love already exist. God’s love leads us to the truth.”

“Being truthful to ourselves can help us develop the right mindset and help us to become more willing to doing a selfassessment.”

quotes on bitter truth of life

“There is nothing that is going to make people hate you more, and love you more, than telling the truth.”

“Truth is like the sun. You can shut it out for a time, but it ain’t goin’ away.”

“It is difficult, when faced with a situation you cannot control, to admit you can do nothing.”

“Yes, the truth may hurt but lies will become a crutch and will cripple you.”

“Facts are threatening to those invested in fraud.”

“Every truth has two sides; it is as well to look at both, before we commit ourselves to either.”

“Truth without love is brutality, and love without truth is hypocrisy.”

“Facts are threatening to those invested in fraud.”

“No one tells the truth to people they don’t actually know, and if they do it is a horrible trait. Everyone wants something smaller, something neater than the truth.”

“Once you reject fear, you will become the perfect candidate to receive and reflect truth.”

“Tell the truth, or someone will tell it for you.”

“Much of what was said did not matter, and that much of what mattered could not be said.”

“The truth isn’t always beauty, but the hunger for it is.”

some bitter truth of life quotes

“Our biggest fear is not in expressing the truth but that we will be attacked or belittled because of our truth.”

“No persons are more frequently wrong, than those who will not admit they are wrong.”

“Many of us live in two worlds when it comes to relationships. In one we have connection without truth; in the other we have truth without connection.”

There’s more beauty in truth, even if it is dreadful beauty.”

“It is an occupational hazard that anyone who has spent her life learning how to lie eventually becomes bad at telling the truth.”

“Every person must choose how much truth he can stand.”

“There are few reasons for telling the truth, but for lying the number is infinite.”

“Sometimes the truth hurts. And sometimes it feels real good.”

“Truth will always be truth, regardless of lack of understanding, disbelief or ignorance.”

“Some people think that the truth can be hidden with a little cover-up and decoration. But as time goes by, what is true is revealed, and what is fake fades away.”

“Truth is so rare that it is delightful to tell it.”

“Once you eliminate the impossible, whatever remains, no matter how improbable, must be the truth.”

“People will generally accept facts as truth only if the facts agree with what they already believe.”

“Learn what is true in order to do what is right.”

quotes about interesting truth of life

“A harmful truth is better than a useful lie.”

“By doubting we are led to question, by questioning we arrive at the truth.”

“Every mind must make its choice between truth and repose. It cannot have both.”

“All truths are easy to understand once they are discovered; the point is to discover them.”

“Three things can not hide for long: the Moon, the Sun and the Truth.”

“In a time of universal deceit – telling the truth is a revolutionary act.”

“There’s a world of difference between truth and facts. Facts can obscure the truth.”

‘Beauty is truth, truth beauty,’ – that is all ye know on earth, and all ye need to know.”

“Justice is truth in action.”

“All truth passes through three stages. First, it is ridiculed. Second, it is violently opposed. Third, it is accepted as being self-evident.”

“Infinite love is the only truth. Everything else is illusion.”

“By doubting we are led to question, by questioning we arrive at the truth.”

“There are no facts, only interpretations.”

“A harmful truth is better than a useful lie.”

“Rather than love, than money, than fame, give me truth.”

“Truth never damages a cause that is just.”

“No one is more hated than he who speaks the truth.”

“The truth is rarely pure and never simple.”

“The truth will set you free, but first it will piss you off.”

“A lie can travel half way around the world while the truth is putting on its shoes.”

Did you enjoy reading these truth of life quotes? If yes, then please share with others too. Also, don’t forget to drop your comment in below comment box.

[Best 110+] Serenity Quotes And Sayings To Motivate You

120+ Sunrise Quotes And Sayings To Make Your Day Beautiful

Health Quotes in Hindi | Top 130+ Powerful Quotes To Motivate Yourself

“I’m not into fashion, but I like design. I wear the same shoes every day.”