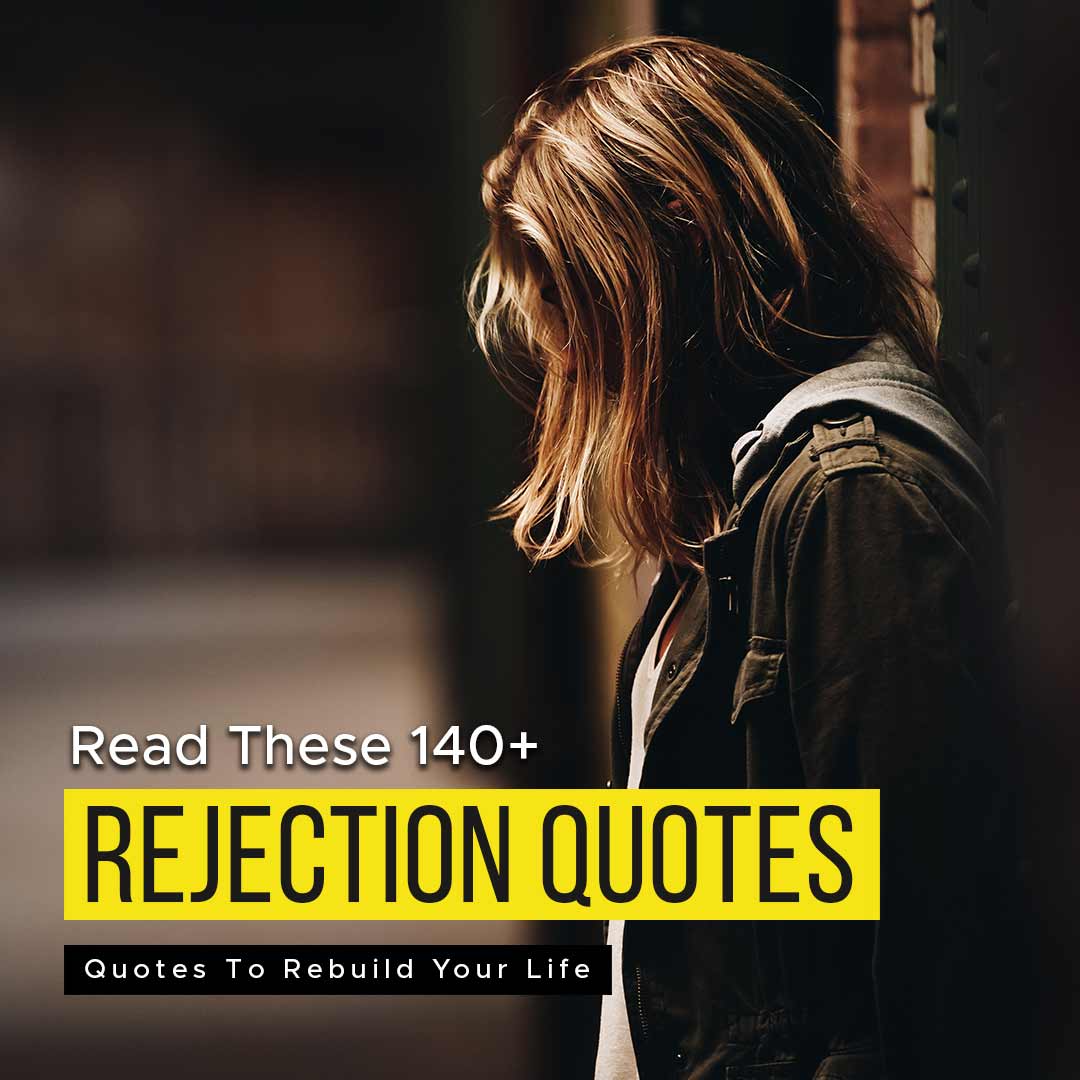 Rejection Quotes | We all want to be successful in our lives, but very few people are very successful in reality. There are many reasons for this, one of which is the fear of rejection.

Whether it is Walt Disney, the discoverer of Disney character Mickey Mouse, or Brian Acton, the founder of the world’s most successful chatting app WhatsApp. Every successful person has seen rejection in their life.

Wouldn’t the heart be hurt at the time of rejection of those people? Wouldn’t they have felt like dropping the idea? There must have been many negative thoughts in his mind, but they only focused on their dreams and work.

If you also want to achieve great success in your life, then you have to be ready for rejection. Rejection is a very important part of a successful person. It gives you courage, it gives your motivation to work more hard.

There can be any rejection, whether it is a rejection of work or in a relationship or rejection of anything else. You should keep a positive mindset in every rejection.

In this article, we will read some quotes related to rejection. I hope these quotes and sayings will definitely motivate you.

“A rejection is nothing more than a necessary step in the pursuit of success.”

“Rejection can disappoint you, depress you and may even stop you in your tracks… learn not to take rejection so personally… if you’re honest with yourself and believe in your work, others will too.”

“A boo is a lot louder than a cheer. If you have 10 people cheering and one person booing, all you hear is the booing.”

“You get used to the rejection and you don’t take it personally.”

“Rejection is merely a redirection; a course correction to your destiny.”

“Do not waste yourself in rejection; do not bark against the bad, but chant the beauty of the good.”

“Don’t feel bad if someone rejects you or ignore you. People usually reject and ignore expensive things because they can’t afford them.”

“Reject your sense of injury and the injury itself disappears.”

“You may not realize it when it happens, but a kick in the teeth may be the best thing in the world for you.”

“It is necessary to put yourself out for rejection, and accept that you will be rejected.”

“The best preparation for tomorrow is doing your best today.”

“In order to succeed, we must first believe that we can.”

“I can’t change the direction of the wind, but I can adjust my sails to always reach my destination.”

“Failure will never overtake me if my determination to succeed is strong enough.”

“No matter what people tell you, words and ideas can change the world.”

“Most fears of rejection rest on the desire for approval from other people. Don’t base your self-esteem on their opinions.”

“A rejection is nothing more than a necessary step in the pursuit of success.”

“I take rejection as someone blowing a bugle in my ear to wake me up and get going, rather than retreat.”

“Rejection just motivates me to keep trying and to try to do better.”

“If we will be quiet and ready enough, we shall find compensation in every disappointment.”

“There can be no deep disappointment where there is not deep love.”

“If you’re betrayed, release disappointment at once. By that way, the bitterness has no time to take root.”

“It does not matter how slowly you go as long as you do not stop.”

“Believe you can and you’re halfway there.”

“Always do your best. What you plant now, you will harvest later.”

“Your work is going to fill a large part of your life, and the only way to be truly satisfied is to do what you believe is great work. And the only way to do great work is to love what you do. If you haven’t found it yet, keep looking. Don’t settle. As with all matters of the heart, you’ll know when you find it.”

“My mission in life is not merely to survive, but to thrive; and to do so with some passion, some compassion, some humor, and some style.”

“Start by doing what’s necessary; then do what’s possible; and suddenly you are doing the impossible.”

“Do not worry when rejected by mankind. If you return to God, your righteous Maker will receive you.”

“A rejection may cause pain. However, it’s not a failure; it shows the reality and other ways too.”

“Rejection of desire is liberating. Renunciation is a form of power.”

“Rejection is a part of any man’s life. If you can’t accept and move past rejection, or at least use it as writing material – you’re not a real man.”

“We all learn lessons in life. Some stick, some don’t. I have always learned more from rejection and failure than from acceptance and success.”

“An unexamined faith is not worth having, for fundamentalism and uncritical certitude entail the rejection of one of the great human gifts: that of free will, of the liberty to make up our own minds based on evidence and tradition and reason.”

“It’s rare for someone to give you a helping hand when you’re going through rejection.”

“You get used to the rejection and you don’t take it personally.”

“What’s incredible with Trent Reznor is how he took all the alienation and the rejection of traditional rock and found a way to encapsulate it in a form that made the public finally get industrial music.”

“Every candle that gets lit in the dark room must feel a little rejection from the darkness around it, but the last thing I want from those who hold a different world view to me is to accept me.”

“It is impossible, in my mind, to distinguish between the refusal to receive a petition, or its summary rejection by some general order, and the denial of the right of petition.”

“Too many Christians have a commitment of convenience. They’ll stay faithful as long as it’s safe and doesn’t involve risk, rejection, or criticism. Instead of standing alone in the face of challenge or temptation, they check to see which way their friends are going.”

“As important as hustle is, grit and resilience are equally as important because there’s a lot of rejection in our business.”

“I have learned not to allow rejection to move me.”

“If a circle shuts you out, draw a circle around it.”

“I have learned not to allow rejection to move me.”

“A man who rejects you is simply clearing the way for the One you deserve.”

“If you aren’t mad about the rejection, you didn’t invest enough into the process.”

“Depression taught me how to love myself more than rejection ever could.”

“Finish your race even if you must do it bruised and alone.”

“The only thing that will help us move past the giant of rejection is to immerse ourselves in the acceptance of Christ.”

“To be set aside is to be rejected. To be set apart is to be given an assignment that requires preparation.”

“People’s rejection can be God’s direction for you.”

“Never fear rejection for a life of regretting.”

“Perfection is not attainable, but if we chase perfection we can catch excellence.”

“What you do today can improve all your tomorrows.”

“Nothing is impossible, the word itself says ‘I’m possible’!”

“You are never too old to set another goal or to dream a new dream.”

“Friendship was a concept men bandied about to save face when they were rejected.”

“When you’re following your inner voice, doors tend to eventually open for you, even if they mostly slam at first.”

“But there’s only so much rejection you can take before you finally give up and stop trying.”

“Rejection is a challenge.”

“You have to take all the rejections that life will throw at you. We do not grow in happiness, but we grow in sadness. Each rejection teaches us something new.”

“Every broken heart has screamed at one time or another, “I want to know why!”

“Put your heart, mind, and soul into even your smallest acts. This is the secret of success.”

“A clear rejection is always better than a fake promise.”

“Learn to eat rejection; it will make you stronger.”

“We are always afraid to ask because we aren’t afraid of the answer but the feeling of rejection.”

“Rejection doesn’t have to mean you aren’t good enough; it often just means the other person failed to notice what you have to offer.”

“Rejection is the sand in the oyster, the irritation that ultimately produces the pearl.”

“Artistic rejection is like taking cod liver oil; they say it’s good for you, you know they’re right, but it can be still tough to swallow.”

“I take rejection as someone blowing a bugle in my ear to wake me up and get going, rather than retreat.”

[Top 150+] Growing Up Quotes That Will Motivate You

Stop Having Expectations, Know Why? Read These Quotes

Best 120+ Nothing Is Impossible Quotes | Believe In Yourself

“I wear the black in the morning for the lives that could have.”