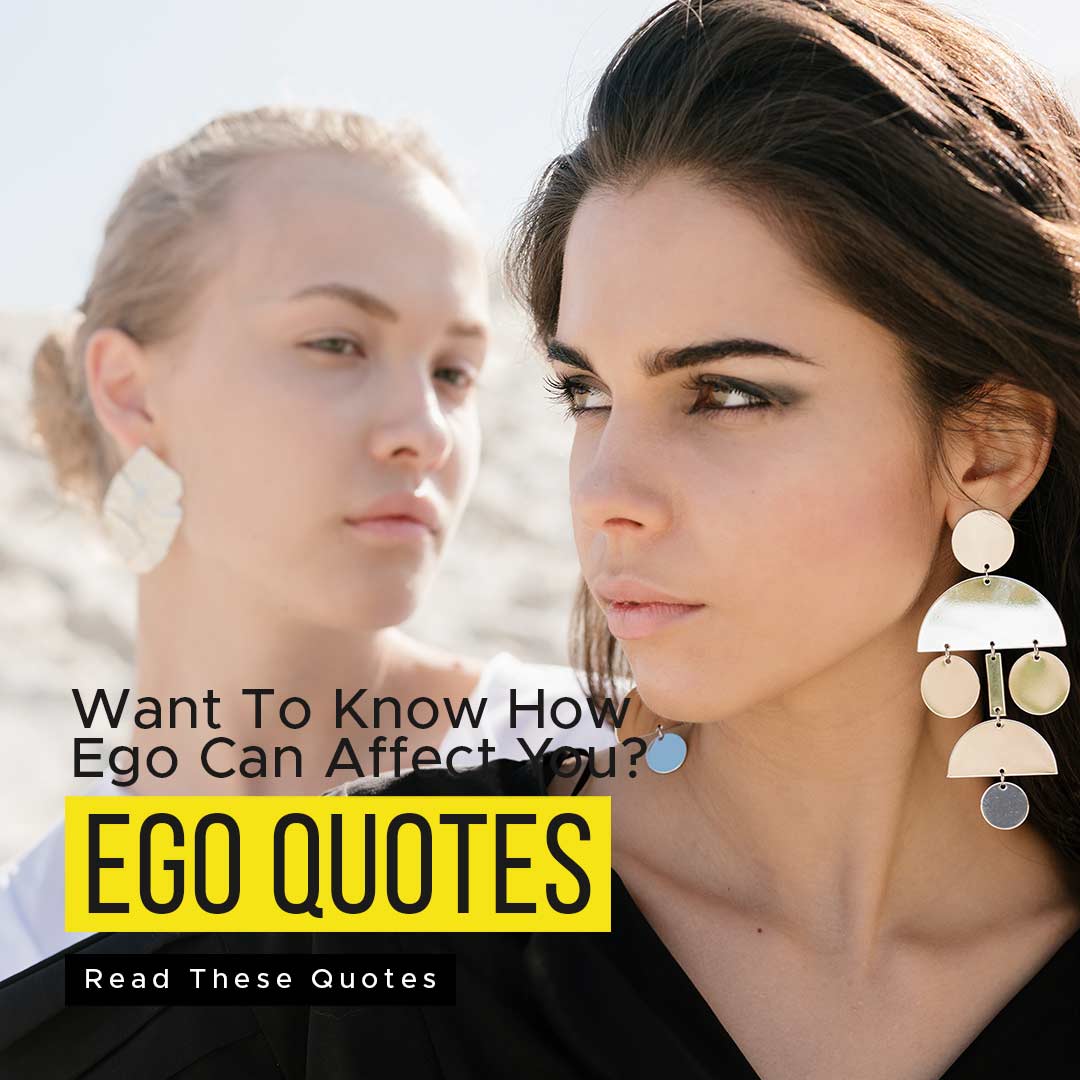 Ego Quotes | Every religion and old scriptures of the world agree on one thing: Ego can destroy the human being. Ego is the only termite that can eat your whole life, and you will not even know.

Let’s know what difference between ego and attitude? Attitude means you understand yourself better than the other, and you have to work in positivity and confidence.

But ego means having a negative feeling in thinking, and in such a way, a person intend to harm the other.

For instance, suppose a boy proposes to a girl, and in return the girl slaps that boy in front of her friends. If the boy was having a negative thinking in such a case, then his ego will be hurt, and he could do some wrong things.

In real life also, we heard a lot of incidents where just because of ego problem it creates sometimes really serious issues. That’s why we should always keep our thinking positive and broad.

Let’s read some quotes about ego.

“Let us be more simple and less vain.”

“Stupidity combined with arrogance and a huge ego will get you a long way.”

“If your ego starts out, ‘I am important, I am big, I am special,’ you’re in for some disappointments when you look around at what we’ve discovered about the universe. No, you’re not big. No, you’re not. You’re small in time and in space. And you have this frail vessel called the human body that’s limited on Earth.”

“The ultimate aim of the ego is not to see something, but to be something.”

“Rule your mind or it will rule you.”

“Let go of your ego no matter how high you go.”

“When misunderstandings grow cut your ego.”

“Conquer and tame the ego.”

“Ego is the biggest enemy of humans.”

“Your ego is your soul’s worst enemy.”

“Too much ego will kill your talent.”

“The Ego’s job is to kill everything but itself.”

“When the ego dies, the soul awakes.”

“I get pretty terrified, to be honest, when I’m on tour. You really have to muster a lot of ego to go our there, which I find rather draining.”

“I am not a superstar or an ego. I am just the same as I always was: Someone who plays football.”

“I have a huge ego and a huge inferiority complex at the same time.”

“The great corrupter of public man is the ego. Looking at the mirror distracts one’s attention from the problem.”

“Sacrifice is a leader who puts the needs of millions of others before his own, who can forgo ego and pride in order to do what he promised he would. It’s rising above pettiness and partisanship for the good of the country.”

“As a busker, one thing that does not work is self-consciousness. A busker needs to be working. A busker needs to shed all ego and get down to work. Play your songs, play them well, earn your money, and don’t get in people’s way.”

“As big as my ego may be, I’m really not of the belief that I can’t be replaced. I didn’t invent the wheel. There’s someone else out there who can do what I do, maybe a little differently. I believe that Kiss is bigger than its individual members.”

“I’m a competitor, and I’m sure a lot of people who don’t get to play because of an injury, whether it’s their pride or their ego, whatever it is, they want to be out on the field.”

“Where id was, there ego shall be.”

“We must go beyond the constant clamor of ego, beyond the tools of logic and reason, to the still, calm place within us: the realm of the soul.”

ego and self respect quotes

“Each Warrior wants to leave the mark of his will, his signature, on important acts he touches. This is not the voice of ego but of the human spirit, rising up and declaring that it has something to contribute to the solution of the hardest problems, no matter how vexing!”

“It’s the sense of superiority and certainty that exceeds the bounds of confidence and talent.”

“All ego really is, is our opinions, which we take to be solid, real, and the absolute truth about how things are.”

“The ego is only an illusion, but a very influential one. Letting the ego-illusion become your identity can prevent you from knowing your true self.”

“Your ego is your self-image created by thought. It’s your social mask requiring validation because it lives in fear of losing its sense of identity.”

“To me the ego is the habitual and compulsive thought processes that go through everybody’s mind continuously. External things like possessions or memories or failures or successes or achievements. Your personal history.”

“The ego mind both professes its desire for love and does everything possible to repel it, or if it gets here anyway, to sabotage it. That is why dealing with issues like control, anger, and neediness is the most important work in preparing ourselves for love.”

“The smallest wound or pain of the ego is examined under a microscope as if it were of eternal importance. The artist considers his isolation, his subjectivity, his individualism almost holy.”

quotes on ego in relationships

“But marriage goes in waves. You’ve got to be patient. People bail and give up on their marriages way too early. They just don’t put the work and the effort into it. You’ve got to suck up your ego a lot of times, because that can be a big downfall.”

“Checking your ego, abandoning it, letting it go, is a huge part of recovery from addiction.”

“Ego is a social fiction for which one person at a time gets all the blame.”

“I think any spiritual experience that’s worthwhile is not about ego and it will humble you in some way. And also, a Zen monk once said to me, ‘If you’re not laughing, then you’re not getting it.'”

“I turned down ‘Harry Potter’ and ‘Spider-Man,’ two movies that I knew would be phenomenally successful, because I had already made movies like that before and they offered no challenge to me. I don’t need my ego to be reminded.”

“The minute you start compromising for the sake of massaging somebody’s ego, that’s it, game over.”

“One may understand the cosmos, but never the ego; the self is more distant than any star.”

“Whenever I climb I am followed by a dog called ‘Ego’.”

“Canada has a passive-aggressive culture, with a lot of sarcasm and righteousness. That went with my weird messianic complex. The ego is a fascinating monster. I was taught from a young age that I had to serve, so that turned into me thinking I had to save the planet.”

“Leave your ego at the door every morning, and just do some truly great work. Few things will make you feel better than a job brilliantly done.”

“If you get your ego in your way, you will only look to other people and circumstances to blame.”

“Check your ego at the door. The ego can be the great success inhibitor. It can kill opportunities, and it can kill success.”

“I like the moment when I break a man’s ego.”

“You can either be a host to God, or a hostage to your ego. It’s your call.”

“Leadership is not a popularity contest; it’s about leaving your ego at the door. The name of the game is to lead without a title.”

“I am not a superstar or an ego. I am just the same as I always was: Someone who plays football.”

“I am a bit difficult to be around sometimes. I can be stubborn on a lot of things, and I’m set, but I can also adapt in a conflict situation and don’t hold on to an ego. I end up seeing the larger good and adapt to it, provided it benefits me. I may come across as a cold person, but I am extremely sentimental.”

“The kind of people that all teams need are people who are humble, hungry, and smart: humble being little ego, focusing more on their teammates than on themselves. Hungry, meaning they have a strong work ethic, are determined to get things done, and contribute any way they can. Smart, meaning not intellectually smart but inner personally smart.”

“We must do our work for its own sake, not for fortune or attention or applause.”

“Impressing people is utterly different from being truly impressive.”

“My opponent is my teacher, my ego is my enemy.”

“Your ego screams for people to acknowledge you. But you must do nothing. Take it. Eat it until you’re sick. Endure it. Quietly brush it off and work harder.”

“When ego is lost, limit is lost. You become infinite, kind, beautiful.”

“Let us be more simple and less vain.”

“Whenever I climb I am followed by a dog called ‘Ego’.”

“On the highest throne in the world, we still sit only on our own bottom.”

“Flattery is all right so long as you don’t inhale.”

“You’re not as good as you think. You don’t have it all figured out. Stay focused. Do better.”

‘Dissolve your ego before it dissolves your self.”

“We come nearest to the great when we are great in humility.”

Thank you for reading this article. If you loved reading these Ego Quotes then please share them with others too. Also, you can drop your comments in below comment box.

160+ Inspirational Quotes About Life Is Hard But Not Impossible

80+ Incredible Rain Quotes To Make You Calm And Happy

150+ Attitude Dialogue And Status In Hindi, Marathi And English

“No one leaves an old friend unless they are ashamed.”