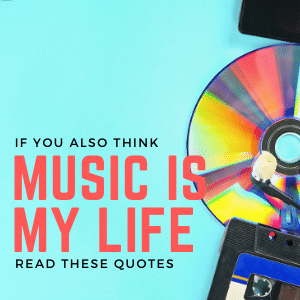 Quotes About Music Is My Life | Music is not less than any medicine. Music has so much power that it creates a different passion in you. If you are also fond of music, you will definitely like these beautiful quotes.

Music Is My Life Status And Captions

“Music can change the world.”

“Without music, life would be a mistake”

“I can chase you, and I can catch you, but there is nothing I can do to make you mine.”

“Music gives a soul to the universe, wings to the mind, flight to the imagination and life to everything.”

“How is it that music can, without words, evoke our laughter, our fears, our highest aspirations?”

“If I were not a physicist, I would probably be a musician. I often think in music. Also I live my daydreams in music. I see my life in terms of music.”

“I think music in itself is healing. It’s an explosive expression of humanity. It’s something we are all touched by. No matter what culture we’re from, everyone loves music.”

“Music brings a warm glow to my vision, thawing mind and muscle from their endless wintering.”

“Softly, deftly, music shall caress you. Hear it, feel it, Secretly possess you.”

“Most people die with their music still locked up inside them.”

“Music is the moonlight in the gloomy night of life.”

“It’s like if the music is loud enough I won’t be able to listen to my own thoughts. ”

Read Music Is My Life Quotes

“There is nothing more to be said or to be done tonight, so hand me over my violin and let us try to forget for half an hour the miserable weather and the still more miserable ways of our fellowmen.”

“Music causes us to think eloquently.”

“Christmas and music go together.”

“Love is a friendship set to music.”

“Music is an outburst of the soul.”

“Music is the art which is most nigh to tears and memory.”

“Music, once admitted to the soul, becomes a sort of spirit, and never dies.”

“One good thing about music, when it hits you, you feel no pain.”

“Music is the emotional life of most people.”

“Every life has a soundtrack.”

“Where words leave off, music begins.”

“Music is my higher power.”

“Music is the only thing I’ve ever known that doesn’t have any rules at all.”

“I think there is a song out there to describe just about any situation.”

Quotes About Music And Love You Must Read

“Music. A meaningless acceleration in the rhythm of celestial experience.”

“Songs are sneaky things; they can slip across borders.”

“Music is feeling. You can try to verbalize it. It really just hits you or it doesn’t.”

“Tell me what you listen to, and I’ll tell you who you are.”

“When you play, never mind who listens to you.”

“Music, my rampart and my only one.”

“This will be our reply to violence: to make music more intensely, more beautifully, more devotedly than ever before.”

“Music is what tell us that the human race is greater than we realize.”

“If you were music, I would listen to you ceaselessly, and my low spirits would brighten up.”

“I would rather write 10,000 notes than a single letter of the alphabet.”

“Music brings a warm glow to my vision, thawing mind and muscle from their endless wintering.”

“Music is a great healer. Begin and end your day with music.”

“My heart, which is so full to overflowing, has often been solaced and refreshed by music when sick and weary.”

“If everyone started off the day singing, just think how happy they’d be.”

“He who sings scares away his woes.”

“That’s what good music does. It speaks to you. It changes you.”

“Who hears music, feels his solitude peopled at once.”

“Life seems to go on without effort when I am filled with music.”

“Music is the universal language of mankind.”

“If music be the food of love, play on.”

“Music is love, love is music, music is life, and I love my life. Thank you and good night.”

“Music is moonlight in the gloomy night of life.”

“Music is the divine way to tell beautiful, poetic things to the heart.”

“Music acts like a magic key, to which the most tightly closed heart opens.”

“Music acts like a magic key, to which the most tightly closed heart opens.”

If you life this article music is my life, then don’t’ forget to share with your friends too. Also drop your comments in below comment box too. Keep listening music an get inspired.

Read 50+ Please Forgive Me And Sorry Quotes With Images

100+ Ignoring Quotes By Someone You Love (With Images)

Quotes On Feeling Good With Beautiful Images | Be Positive

“I don’t have a therapist, so I use me as my own therapist when I’m making the music.”