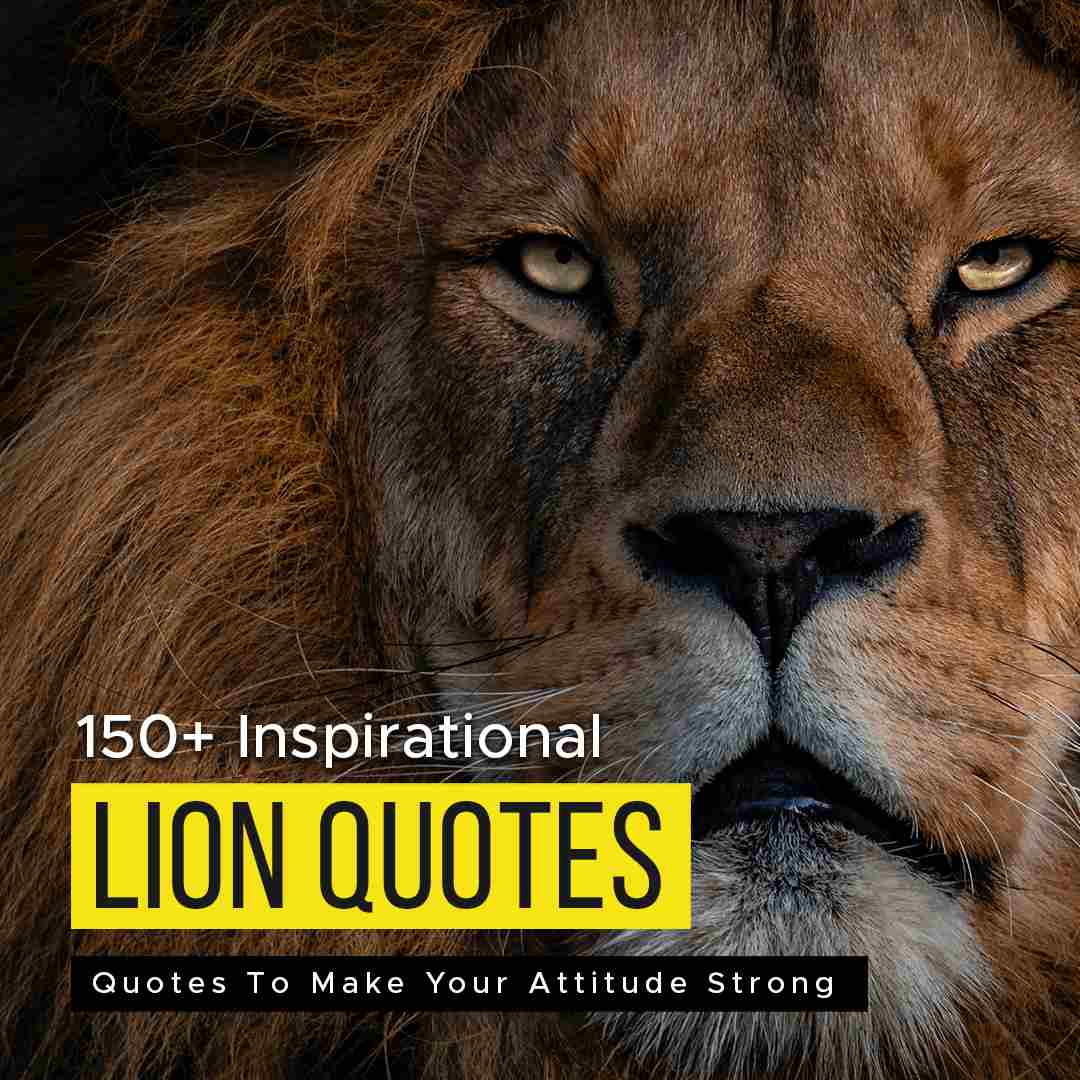 Inspirational Lion Quotes | I am neither faster than a cheetah. Neither am I stronger than an elephant. Neither am I smarter than a fox. But still, I am called the king of the jungle. Do you know why? Because I have the attitude of a king.

My gait, my vision, my confidence make me a king. Do you know the difference between a lion and other animals?

When the rest of the animals see the lion, they say, “run away; the hunter has arrived.” But, when the lion sees the animals, he says, “I have found my prey.”

Now, that’s called a positive attitude and confidence. You have to keep your attitude so strong that people salute you, praise you.

If still, you do not see the attitude in the lion, then look at the eyes in the picture given below. Confidence and attitude are visible in those eyes.

Do you know what it means? It means never to think of your enemy as weak or small. Whether your target is small or big, you should apply your full strength.

In this article, we will read some such positive lion quotes to increase your level of motivation.

“I was not the lion, but it fell to me to give the lion’s roar.”

“Fear an ignorant man more than a lion”

“Attack your goals like your life depends on it.”

“Everyone wants to EAT, but few are willing to hunt.”

“Never Back Down. Never Relent.”

“If you are in the way of my goals and dreams, i suggest you move!”

“The devil whispers “you can’t withstand the storm”. The worrier replied “I am the storm”

“The world is a jungle. You either fight and dominate or hide and evaporate.”

“Do i have all the answers: NO. Am i committed to finding them: YES!”

“I’m coming for EVERYTHING they said i would never have!”

“My DESIRE could not be HIGHER.”

“Often, what hurts the most is what grows you the most.”

“Be like a lion and a wolf, then you have a big heart and the power of leadership.”

“If size mattered, the elephant would be the king of the jungle.”

“Look inside my soul and you will see how bad i want it.”

“A lion doesn’t concern himself with the opinion of sheep.”

“The lion does not turn around when a small dog barks.”

“The greatest fear in the world is of the opinions of others. And the moment you are unafraid of the crowd you are no longer a sheep, you become a lion. A great roar arises in your heart, the roar of freedom.”

“A fierce wolf is greater than a cowardly lion.”

“There never was a woman like her. She was gentle as a dove and brave as a lioness.”

“A lion does not fear at laughter coming from a hyena.”

“Don’t be ashamed of your scars. They are just reminders that you are a survivor. You are stronger than whatever tried to hurt you.”

“True courage is in facing danger when you are afraid.“Well, somebody once told me that the great kings of the past are up there, watching over us.”

“I’m only brave when I have to be. Being brave doesn’t mean you go looking for trouble.”

“The young lions roar for their prey, seeking their food from God.”

“Everyone wants to eat but few are willing to hunt”

“Remember who you are. You are my son and the one true king.”

“I have a heart of a lion, the strength of ten and the desire of a thousand men.”

“The stars came out in search of the moon.”

“There’s more to being king than getting your way all the time.”

“Oh yes, the past can hurt. But from the way I see it, you can either run from it or learn from it.”

“You are more than what you have become.”

“Look beyond what you see.”

“Remember who you are.”

“I’m only brave when I have to be. Being brave doesn’t mean you go looking for trouble.”

“See, I told you having a lion on our side wasn’t such a bad idea.”

“The lion teaches to avoid confrontation, but to stand up fiercely when necessary. It is through the strength of love, gentleness, and patience that the lion holds its community together.”

“The lions taught me photography. They taught me patience and the sense of beauty, a beauty that penetrates you.”

“I walk like a lioness, waiting patiently for the right opportune moment, to hunt success from the jaws of defeat.”

“Rise and rise again, till lambs become lions. Never give up!”

“A wounded lion is more dangerous.”

“The silent breath of a wounded lion is more dangerous than its roar.”

“Meowing time is over, now it’s time to roar.”

“Some people lose all respect for the lion unless he devours them instantly. There is no pleasing some people.”

“A lion is called a ‘king of beasts’ obviously for a reason.”

“The lion is an emblem of the dream of absolute power — and, as a wild rather than a domestic animal, he belongs to a world outside the realm of society and culture.”

“The difference between a brave man and a coward is a coward thinks twice before jumping in the cage with a lion. The brave man doesn’t know what a lion is. He just thinks he does.”

“People go to the zoo and they like the lion because it’s scary. And the bear because it’s intense, but the monkey makes people laugh.”

“I am sometimes a fox and sometimes a lion. The whole secret of government lies in knowing when to be the one or the other.”

“Love has the face of a goddess, but the talons of a lion.”

“I try to think of myself as a lion, bringing down the kill, controlling the jungle. A lion controls his jungle.”

“The lion doesn’t care that the sheep laugh at him. Remember that. The lion just stays there. The animals make noise and tease. The guy with the belt is the lion.”

“At twenty a man is a peacock, at thirty a lion, at forty a camel, at fifty a serpent, at sixty a dog, at seventy an ape, at eighty a nothing at all.”

“Fear not, we are of the nature of the lion, and cannot descend to the destruction of mice and such small beasts.”

“To beat a lion, you have to have the heart of a lion.”

Quotes And Sayings For Motivation

“In boxing, it is about the obsession of getting the most from yourself: wanting to dominate the world like a hungry young lion.”

“The lion and the calf shall lie down together but the calf won’t get much sleep.”

“‘Lauv’ comes from the Latvian word for lion, and my mom’s side of the family is from Latvia – it’s a place I’ve been probably 15 times or more. I’m also a Leo, and my real name, Ari, means lion.”

“It was the nation and the race dwelling all round the globe that had the lion’s heart. I had the luck to be called upon to give the roar.”

“Until the lion tells his side of the story, the tale of the hunt will always glorify the hunter.”

“Even a hare, the weakest of animals, may insult a dead lion.”

“A lion sleeps in the heart of every brave man.”

“If you could cross a lion and a monkey, that’s what I’d be, because monkeys are funny and lions are strong.”

“Dressed in the lion’s skin, the ass spread terror far and wide.”

“I refuse to be outworked, and I consider myself to have the heart of a lion.”

“Do I believe in arbitration? I do. But not in arbitration between the lion and the lamb, in which the lamb is in the morning found inside the lion.”

“Funny enough, you know who I used to really like in Lion King? It was Scar.”

“I’m a lion. I’m not tough, but I am strong. I’m definitely not a wallflower.”

“Lion’s mane may be our first ‘smart’ mushroom. It is a safe, edible fungus that appears to confer cognitive benefits on our aging population.”

“I’ve grown up on American songwriters my whole life – listening to Paul Simon and Bob Dylan and people like John Prine – you know, classic, real songwriters. They’ve been the lion’s share of what I’ve really focused on as a writer and as influences, too.”

“I was a creative player, but I got some bad injuries early on and I decided that if this was a jungle we were playing in then it’s better to be a lion than a lamb.”

“That was my one big Hollywood hit, but, in a way, it hurt my picture career. After that, I was typecast as a lion, and there just weren’t many parts for lions.”

“Some people lose all respect for the lion unless he devours them instantly. There is no pleasing some people.”

“The Lion King is one of my favorite stories ever.”

“The lion’s share of what I listened to in the Eighties, what really affected me, was coming from Britain.”

“I’ve eaten sheep’s eyes, the still hot meat from a zebra killed by a lion, and maggots which give you 70 calories to the ounce.”

lion attitude quotes you must read

“My father is a South African actor who danced in broadway musicals for ‘Lion King.'”

“I’m for conservation, but it’s mostly a con. That’s the trouble. It’s sentimental. Buy an elephant a drink, a lion an acre.”

“I’ve got a friend who is a lion tamer. He used to be a school teacher till he lost his nerve.”

“Satan may roar; but my defender is the Lion of Judah, and He will fight for me!”

“My God’s not dead He’s surely alive, He’s living on the inside roaring like a lion.”

“You may see all my weaknesses but look closer for I have a Lion living within me who is Christ Jesus.”

“Let your faith roar so loud that you can’t hear what doubt is saying.”

“The Lion of the tribe of Judah will soon drive away all his adversaries.”

“Let the pure gospel go forth in all its lion-like majesty, and it will soon clear its own way and ease itself of its adversaries.”

“Servanthood does not nullify leadership; it defines it. Jesus does not cease to be the Lion of Judah when He becomes the lamblike servant of the church.”

“The fear of God is the death of every other fear; like a mighty lion, it chases all other fears before it.”

“A Praying man is as bold as a lion, there is no demon in hell that will scare him!”

“Trying to prove God is like defending a lion. It doesn’t need your help – just unlock the cage.”

Did you find these Lion Quotes inspirational? If yes, then share with others too. Also, don’t forget to drop your comments in below comment box.

Life Quotes in Hindi | Top 65+ Quotes You Must Read Now

160+ Inspirational Quotes About Life Is Hard But Not Impossible

Read These 140+ Rejection Quotes To Rebuild Your Life

88 Amazing Courage Quotes You Must Know By Great People

“A man is not complete until he has seen the baby he has made.”