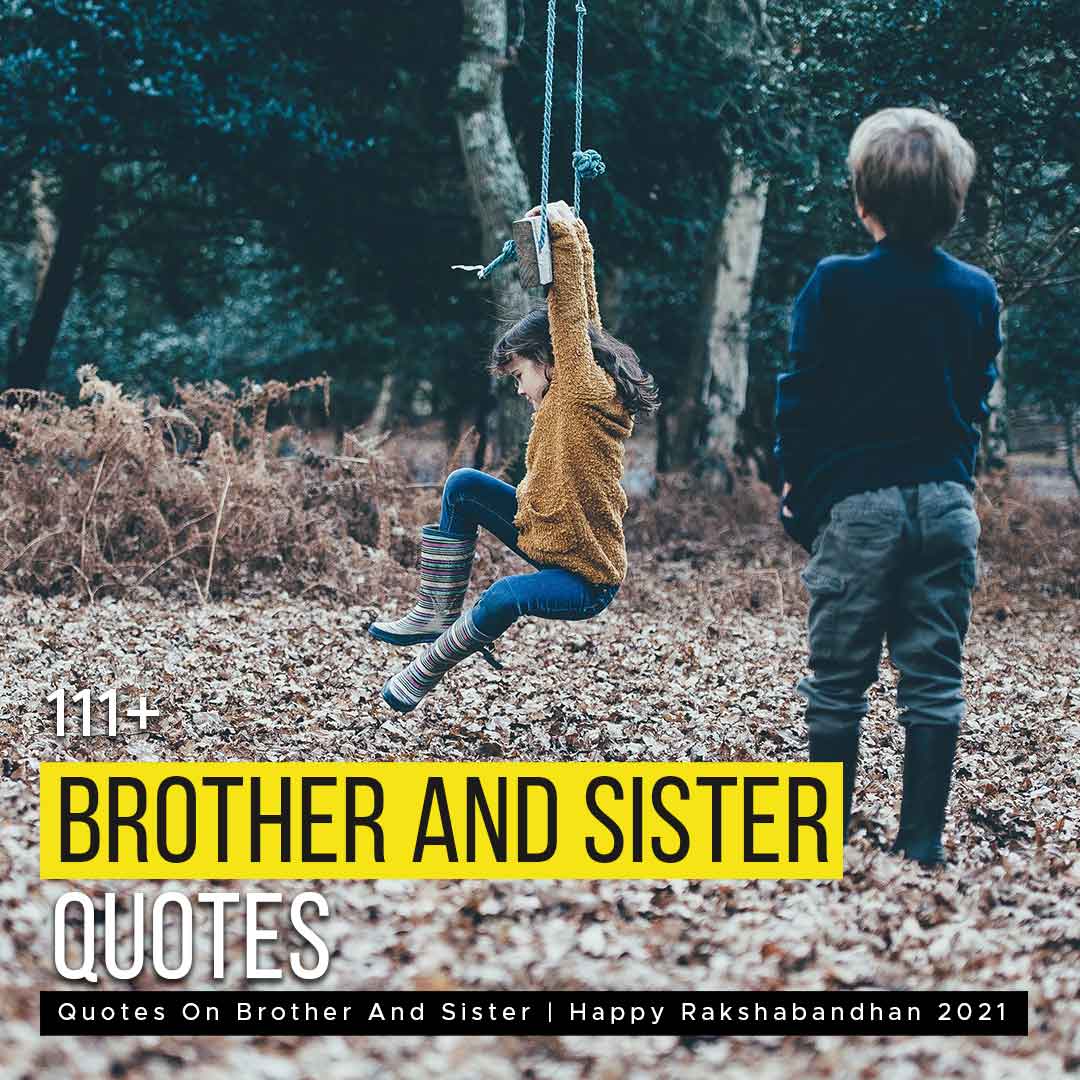 Quotes On Brother And Sister | The festival of Rakshabandhan is about to come in just a few days. This festival is made every year with great love in India. In this, the sister ties a rakhi (a kind of beautiful designer thread) in her brother’s hand and, in return, expects that her brother will always protect her and also wish him a great life.

This festival may not be celebrated in other countries. Still, the relationship of every brother and sister is almost the same in every corner of the world. The relation between the sister and brother is very beautiful and lovely.

In this article, we will read some beautiful lines and quotes written for all the brothers and sisters around the world. And yes, ma ny, many congratulations to you all for the coming Rakshabandhan.

“The mildest, drowsiest sister has been known to turn tiger if her sibling is in trouble.”

“Our siblings push buttons that cast us in roles we felt sure we had let go of long ago – the baby, the peacekeeper, the caretaker, the avoider…It doesn’t seem to matter how much time has elapsed or how far we’ve traveled.”

“Brothers and sister may change, but to each other, they will always remain the same.”

“Don’t call someone brother or sister if you don’t give them enough respect or always have their back.”

“Having a sister taught me to love and respect women & having an older brother taught me how to treat them.”

“As a little brother, I respect you care for you and love for you. I won’t disappoint you sister.”

“As a big brother, the day comes when you have to respect your baby sister’s thoughts, actions and vision as a mature and intellectual woman.”

“Growing up, I had a very normal relationship with my brother and sister. But, over time, they became my best friends, and now I hang out with them all the time. I’m very close with them.”

“I was the youngest child and got a lot more freedom than my brother and sister. I used to wander, doing my own thing under the radar, but I didn’t get in bad, bad trouble.”

“A bond as important as that of a husband and wife, is the bond between siblings.”

“Getting close to books, and spending time by myself, I was obliged to think about things I would never have thought about if I was busy romping around with a brother and sister.”

“Yeah, I started when I was 6 years old. My brother and sister would get all of these presents at Christmas time from the cast and crew of their show and I was jealous. So I decided that I had to become an actor.”

“Being brother and sister means you are part of something wonderful. It means you will love and be loved for the rest of your life. No matter what.”

“My big advert was for ketchup. I come home from school, cook my brother and sister their dinner, ride my bike in the garden. Remember that one? People cried at that advert. It won awards. I was twelve.”

“When I was 4 years old, my brother and sister died of hunger, so I achieved my success through confidence, self-motivation, and my hard work.”

“My elder brother and sister were both sporty and academic, and I think, subconsciously, I knew I couldn’t go down that avenue.”

“The love between a brother and sister is one of life’s greatest blessings.’”

“We may be brother and sister, but we are also best friends.”

“Brothers are Superman; Spiderman and Batman of their sisters.”

“When sisters and brothers stand shoulder to shoulder, who stands a chance against us?”

“Being sister and brother means being there for each other.”

“Our brothers and sisters are there with us from the dawn of our personal stories to the inevitable dusk.”

“I hope my future husband has a sister and a brother, so I know he’s going to respect me. And to have a brother I’ve always wanted.”

quotes on brother and sister

“Giving your all to your little sister and brother just to see them happy is a beautiful thing. Respect you will gain.”

“I do not mind if you treat me as brother, rather I will respect you as my sister.”

“Language is political. That’s why you and me, my brother and sister, that’s why we supposed to choke our natural self into the weird, lying, barbarous, unreal, white speech and writing habits that the schools lay down like a holy law.”

“I may have had a crush on Zac, but we are like brother and sister, so nothing would ever happen.”

“As a brother and sister, our tastes were pretty different growing up. He liked a lot of early hip-hop. My dad didn’t understand it and would try to talk him out of it.”

“The love between a brother and sister just over a year apart in age held fast. It wasn’t twinship, and it wasn’t romance, but it was more like a passionate loyalty to a dying brand.”

“Some people really need to realize they need to treat people with the respect they want their little sister or brother to be treated with.”

“Friends come and go but brothers and sisters are forever.”

“Brothers and sisters are as close as hands and feet.”

“Since parents are the role model, you’ll hear your child speak to his sister or brother using your words and tone of voice.”

“Sibling relationships…outlast marriages, survive the death of parents, resurface after quarrels that would sink any friendship. They flourish in a thousand incarnations of closeness and distance, warmth, loyalty and distrust.”

“I don’t believe an accident of birth makes people sisters or brothers. It makes them siblings, gives them mutuality of parentage. Sisterhood and brotherhood is a condition people have to work at.”

“My brother has the best sister in the world.”

“A sister or a brother is worth a thousand friends.”

“You and I are brothers and sisters forever. Always remember that if you fall I will pick you up. As soon as I finish laughing.”

“Being brother and sister means being there for each other.”

“Happiness is having a younger brother or sister who is taller than you.”

“Side by side or miles apart, brothers and sisters will always be connected by heart.”

“Time and distance mean nothing between brothers and sisters. We are always in each other’s heart.”

“I grew up together with you and nobody in the world has as strong bond as we have. I love you.”

“Be nice to your siblings, they’re your best link to your past and the most likely to stay with you in the future.”

“Our brothers and sisters are there with us from the dawn of our personal stories to the inevitable dusk.”

“Happiness is brother and sister time.”

“Brothers and sisters get angry with each other, they at times say mean things, but in the longrun they watch out for each other, even though they would never admit it.”

“As brother and sister our paths may change, but the special bond between us will last forever.”

“We can drop or change our friends and our partners, but we cannot fully discard, relationally or psychologically, a brother or sister.”

“Your sister and brother probably know you better than any other person…. You and they go through life together – or at least that is the way it is supposed to be.”

“Our relationship with our nieces are special; different from that of our brother or sister.”

“What brothers say to tease their sisters has nothing to do with what they really think of them.”

“Brothers and sisters are as close as hands and feet.”

“There is no bond like the bond between brothers and sisters. Cherish each other!”

“It is the brothers and sisters who teach one another the lifelong lessons of getting along – or not.”

“Side by side or miles apart, we are brother and sister connected by heart.”

“I treasure the childhood memories we made together as brother and sister.”

“No matter what your age difference, your brothers and sisters could become your best friends and will always be there for you.”

“If you have a brother or sister, tell them you love them every day-that’s the most beautiful thing. I told my sister how much I loved her every day. That’s the only reason I’m OK right now.”

“Sweet is the voice of a sister in the season of sorrow, and wise is the counsel of those who love us.”

“Whatever you do they will love you; even if they don’t love you they are connected to you till you die. You can be boring and tedious with sisters, whereas you have to put on a good face with friends.”

“What sets sisters apart from brothers and also from friends is a very intimate meshing of heart, soul and the mystical cords of memory.”

“Always and no matter what brothers and sisters are there for each other in times of troubles.”

“Our brothers and sisters bring us face to face with our former selves and remind us how intricately bound up we are in each other’s lives.”

“To have a loving relationship with a sister is not simply to have a buddy or a confident… it is to have a soulmate for life.”

“As your brother, I always know that you my sister look out for me. And as your younger brother I also know you will always be older than me.”

“If you’re enjoying these quotes, you’ll love our collection of baby quotes that new parents can relate to.”

“Sisters and brothers are the truest, purest forms of love, family and friendship, knowing when to hold you and when to challenge you, but always being a part of you.”

“Brother and sister, together as friends, ready to face whatever life sends. Joy and laughter or tears and strife, holding hands tightly as we dance through life.”

“Children of the same family, the same blood, with the same first associations and habits, have some means of enjoyment in their power, which no subsequent connections can supply.”

“Brothers and sisters can say things to one another that no one else can.”

Loved reading these quotes on brother and sister? If yes, then share it with your sisters and friends too. Also, share your comments in the below comment box.

140 Sister Quotes You Must Tell Her- Quotes About Sister

120+ Romantic Quotes About Intimacy To Make Your Relation More Strong

Best 200+ I Am Sorry Message For Your Loved Ones