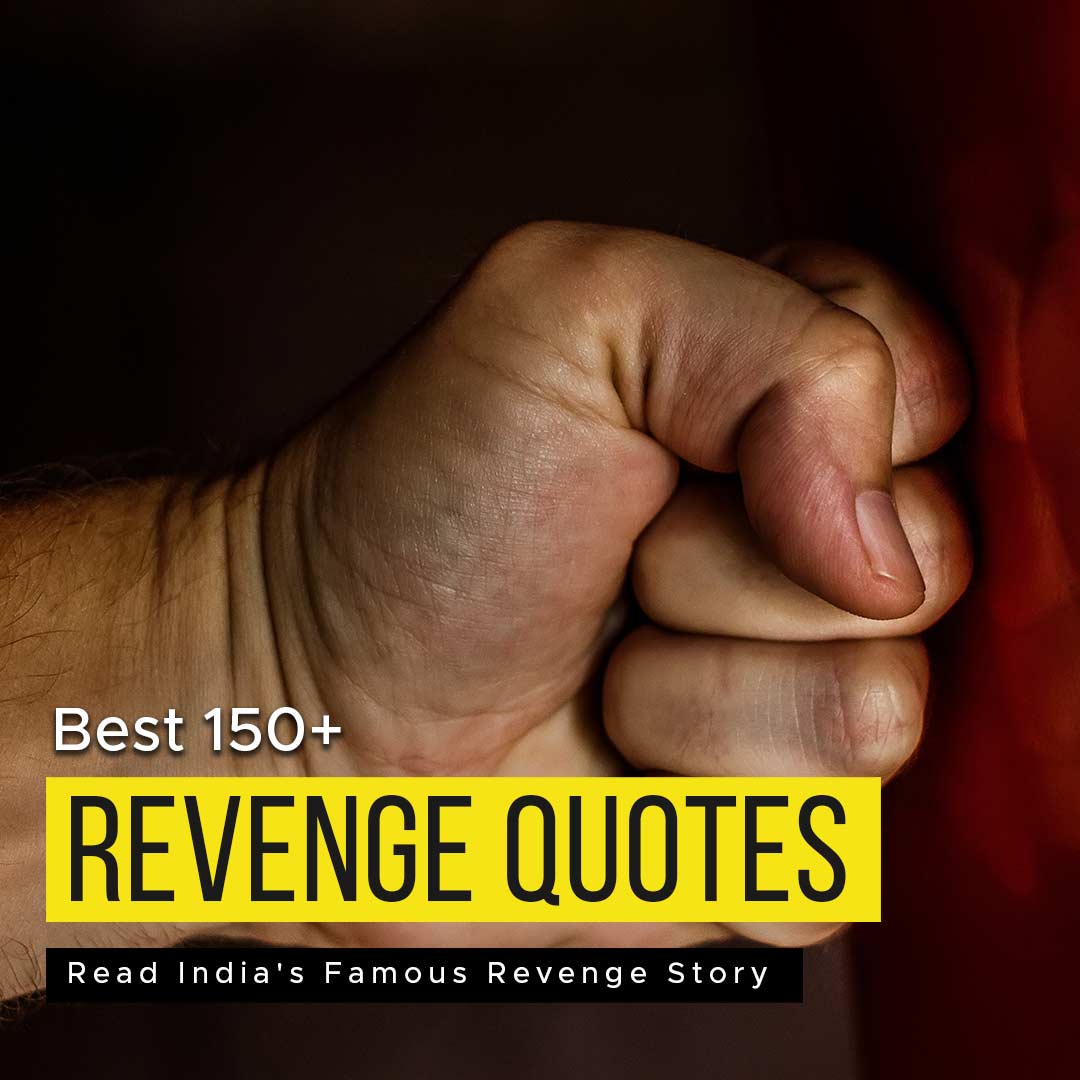 Almost all the people in the world like to be honest towards their work and towards the people. The way they live, they expect the same from other people.

But it is not possible to be good with us every time. Sometimes we get cheated, sometimes people take advantage of us. In such a situation, some people forget and forgive, but some think one step ahead, which is to take revenge.

If you think of taking such revenge that causes any physical or mental harm to the person, then that revenge is wrong. It is said that the best revenge in the world is a massive success. You become very successful in something; that is the only big revenge for people.

In this article, we will read about some revenge quotes. At the end of this article, there is a very inspiring and real story about a great freedom fighter in India. It has been told in the story how he waits 21 years to take his revenge. If you want to read that story now, click on this link.

“Can’t get blood from a stone.”

“I’m not real big on repentance … I like revenge better.”

“While seeking revenge, dig two graves – one for yourself. Douglas Horton”.

“There is nothing funny about Halloween. This sarcastic festival reflects, rather, an infernal demand for revenge by children on the adult world.”

“Hunger, revenge, to sleep are petty foes, But only death the jealous eyes can close.”

“Not forgiving is like drinking rat poison and then waiting for the rat to die.”

“In moments of pain, we seek revenge.”

“Follow me if I advance! Kill me if I retreat! Revenge me if I die!”

“I know what it is to feel unloved, to want revenge, to make mistakes, to suffer disappointment, yet also to find the courage to go forward in life.”

“Loyalty feeds my passion for revenge.”

“If only, revenge had the power to bring peace.”

“In a nutshell, revenge cannot reverse the loss.”

“For the Christian, revenge is a dish best not served at all.”

“Revenge itself may indeed be the best revenge, but slaying one’s enemy does not give back what they stole.”

“If you’re enjoying these quotes, you’ll love our collection of enemy quotes that will make you want to cut ties with your frenemies.”

“However miserable you make us, we shall still have the revenge of thinking that your cruelty arises from your greater misery.”

“He who plots to hurt others often hurts himself.”

“The noblest revenge is to forgive.”

“Revenge is a confession of pain.”

“Success is the best revenge for anything. Keep your head down and work hard to achieve.”

“I’m a fighter. I believe in the eye-for-an-eye business. I’m no cheek turner. I got no respect for a man who won’t hit back. You kill my dog, you better hide your cat.”

“There is no need for revenge. Living happily ever after is a sign that you have not let the past beat you.”

“Life being what it is, one dreams of revenge.”

“Revenge is a kind of wild justice, which the more a man’s nature runs to, the more ought law to weed it out.”

“Evil is always devising more corrosive misery through man’s restless need to exact revenge out of his hate.”

“Revenge is a kind of wild justice, which the more man’s nature runs to, the more ought law to weed it out.”

“Revenge is never the best driver for a battle, but a common one.”

“Revenge has its own special taste.”

“Revenge is the raging fire that consumes the arsonist.”

“There is no such thing as justice, all the best that we can hope for is revenge.”

“Writing poems is the best revenge.”

“When you repay evil with evil, you become evil.”

“The most deceptive thing about revenge is in thinking that we’re not hurt by it, when in fact we’re the one’s most hurt by it.”

“I don’t seek revenge because the karma bus always arrives on time.”

“If you’re enjoying these quotes, make sure to read our collection of karma quotes about what goes around & comes around in our life.”

“The best revenge in life is living.”

“Revenge is sweet but not nourishing.”

“I know what it is to feel unloved, to want revenge, to make mistakes, to suffer disappointment, yet also to find the courage to go forward in life.”

“Revenge can only be found on the road to self-destruction.”

“Revenge is not always sweet, once it is consummated we feel inferior to our victim.”

“Looking good is the best revenge.”

“Revenge is the act of passion, vengeance is an act of justice.”

“Revenge is always the weak pleasure of a little and narrow mind.”

“The best revenge is to show them that your life is getting better after they’re gone.”

“Revenge is an act of passion; vengeance of justice. Injuries are revenged; crimes are avenged.”

“To take revenge halfheartedly is to court disaster: Either condemn or crown your hatred.”

“Living well is the best revenge.”

“Gorgeous hair is the best revenge.”

“The best revenge is to live on and prove yourself.”

“No trait is more justified than revenge in the right time and place.”

“Our revenge will be the laughter of our children.”

“Revenge… is like a rolling stone, which, when a man hath forced up a hill, will return upon him with a greater violence, and break those bones whose sinews gave it motion.”

“There is no revenge so complete as forgiveness.”

“Punishment is not for revenge, but to lessen crime and reform the criminal.”

“When a man steals your wife, there is no better revenge than to let him keep her.”

“Revenge is barren of itself: it is the dreadful food it feeds on; its delight is murder, and its end is despair.”

“Revenge is an infection of the spirit.”

“Success is the best revenge.”

“When a man steals your wife, there is no better revenge than to let him keep her.”

“Revenge is backward looking, whereas rationality is forward looking — so the two fail to engage.”

“Funny thing about revenge. It could make a killer out of a nun.”

“I want revenge, but I don’t want to screw up my karma.”

“Revenge is the infliction of pain, in consequence of the neglect or violation of duty.”

quotes about revenge and karma

“When you have the power to screw people over and you don’t–well, that’s when you get to show who you really are.”

“To see an enemy humiliated gives a certain contentment, but this is jejune compared with the highly blent satisfaction of seeing him humiliated by your benevolent action or concession on his behalf. That is the sort of revenge which falls into the scale of virtue.”

“The best revenge is to live on and prove yourself.”

“An eye for an eye will only make the whole world blind.”

“When you begin a journey of revenge, start by digging two graves: one for your enemy, and one for yourself.”

“It is commonly said that revenge is sweet, but to a calm and considerate mind, patience and forgiveness are sweeter.”

“To seek greatness is the only righteous vengeance.”

“No matter the reason, revenge causes a cycle that continues and never ends. It poisons the lives of everyone around you, close to you. Seeking revenge becomes all that you desire but comes at a hefty price.”

“Revenge may be wicked, but it’s natural.”

“He that has revenge in his power, and does not use it, is the greater man.”

“Revenge is not a noble sentiment, but it is a human one.”

“Revenge is what I want. Nothing but pure unadulterated revenge. But my mother brought me up to be a lady.”

“There is nothing wrong with revenge. The wrong has already been done, or there would be no need to even the score.”

“A need for revenge can burn long and hot. Especially if every glance in a mirror reinforces it.”

“The soul of mercy is better than a soul that is revengeful.”

“Revenge is not worthy of you. If you concentrate on revenge, you will keep those wounds fresh that would otherwise have healed.”

“Revenge is not sweet; it is gloomy and a waste of time.”

“Always stay gracious, the best revenge is your paper.”

“A man who contemplates revenge keeps his wounds green.”

“On him that takes revenge, revenge shall be taken, and by a real evil he shall dearly pay for the goods that are but airy and fantastical; it is like a rolling stone, which, when a man hath forced up a hill, will return upon him with a greater violence, and break those bones whose sinews gave it motion.

“Revenge is like a ghost. It takes over every man it touches. Its thirst cannot be quenched until the last man standing has fallen.

“Eye for eye, tooth for tooth, hand for hand, foot for foot.”

“He that has revenge in his power, and does not use it, is the greater man.”

“Revenge, the attribute of gods! They stamped it with their great image on our natures.”

“Revenge is the raging fire that consumes the arsonist.”

This is the story of the great freedom fighter of India who waited 21 days to take his revenge. Know what is the full story on the link given below.

Read These Stress Relief Quotes And Make Yourself Calm

220+ Trust Broken Quotes | Trust Is The Foundation Of Relationship

Quotes On Feeling Good With Beautiful Images | Be Positive

“It takes a long time to grow an old friend.”