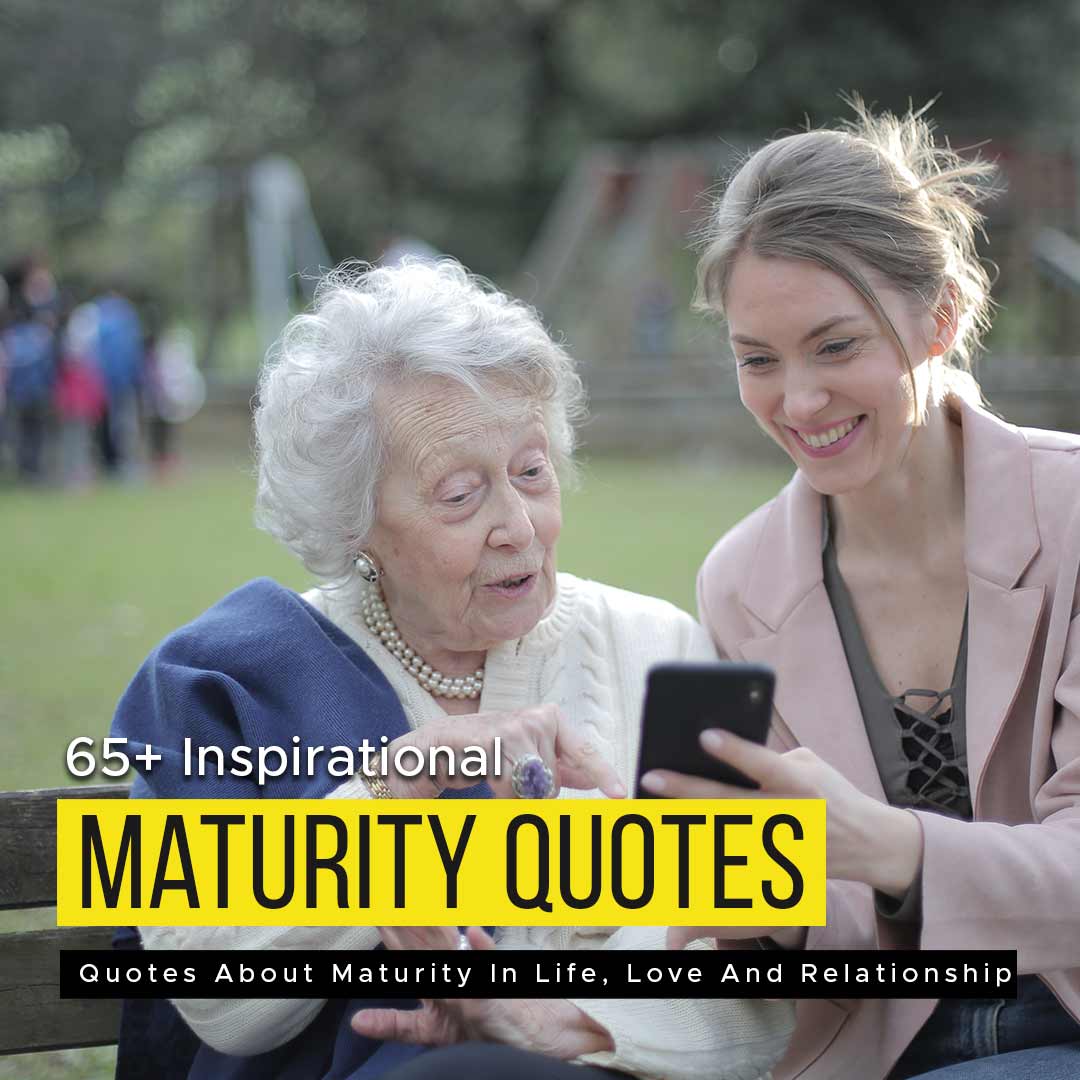 This is a game of time. It is not known when a person becomes mature. We all become mature at some point in our life. Some people mature quickly, and some people take time to mature.

You cannot judge maturity by any one thing, yes. Still, in a way, it can be ascertained the person’s maturity, and that is their way of thinking and working. Their decision-making power, their wisdom tell how mature they’ve become.

Maturity plays the role of identity card in a way to know someone’s understanding. You cannot tell by looking at a person whether he is intelligent or not. But his maturity tells his intelligence.

In this article, we will read about some quotes of maturity.

‘Maturity’ really means: being very unsurprised by, and calm around, pain and disappointment.

“Every new experience brings its own maturity and a greater clarity of vision.”

“Indifference to external events. And a commitment to justice in your own acts.”

“Not caring about winning trivial arguments saves so much time and energy.”

“Yesterday I was clever, so I wanted to change the world. Today I am wise, so I am changing myself.”

“Show wisdom. Do not jump to conclusions. Take a broader view. Give very practical answers. Take a balanced view. Don’t be so dogmatic. Be more tolerant. Look deeper into things. Generate and consider alternatives. Look at things from many angles.”

“Maturity doesn’t come with age; it comes with acceptance of responsibility.”

“Emotional maturity is the ability to stick to a job and to struggle through until it is finished, to endure unpleasantness, discomfort and frustration.”

“Just do your thing, without complaining.”

“Feverishness of fame, pride and social recognition is immaturity. Just wake up and see there is nothing much in it. It’s an empty bowl.”

“Maturity is the ability to live in peace with that which we cannot change.”

“Farmers channel the water; fletchers straighten the arrow; carpenters work the timber; the wise tame themselves.”

“‘Maturity’ really means: being very unsurprised by, and calm around, pain and disappointment.”

“Maturity: knowing where you’re crazy, trying to warn others of the fact and striving to keep yourself under control.”

Quotes On Maturity In Life

“This is the very perfection of a man, to find out his own imperfections.”

“Do something that doesn’t feel good now to feel good later.”

“Maturity, one discovers, has everything to do with the acceptance of “not knowing”

“Confidence comes with maturity, being more accepting of yourself.”

“Maturity is having the courage to use one’s own intelligence.”

“Maturity is the ability to reap without apology and not complain when things don’t go well.”

“Might have been a fool for you once but I won’ be the same fool twice.”

“Maturity is often more absurd than youth and very frequently is most unjust to youth.”

“I think it’s a change that I did not intend at the time but it is clear that, from The Flower of My Secret on, there is a change in my films. A lot of the journalists have very generously attributed this to my growing maturity.”

“I’ve always had a maturity within my writing.”

“How do we know that Moses was grown up? Because he went out unto his brethren, and was ready to bear the burdens and share the plight of his people. Maturity is sensitivity to human suffering.”

“True maturity is only reached when a man realizes he has become a father figure to his girlfriends’ boyfriends – and he accepts it.”

“A petty mind can be never be a great mind.”

“The beauty of growing up is the wisdom that comes with it !”

“I was wise enough never to grow up, while fooling people into believing I had.”

“The prudent man strives for freedom from pain, not pleasure.”

“Tis easier to suppress the first desire, than to satisfy all that follow it.”

“Tho’ modesty is a virtue, bashfulness is a vice.”

“Teach this triple truth to all: A generous heart, kind speech, and a life of service and compassion are the things which renew humanity.”

“To make mistakes is human; to stumble is commonplace; to be able to laugh at yourself is maturity.”

“When I was ten, I read fairy tales in secret and would have been ashamed if I had been found doing so. Now that I am fifty, I read them openly. When I became a man I put away childish things, including the fear of childishness and the desire to be very grown up.”

“The most dangerous thing you can do is to take any one impulse of your own nature and set it up as the thing you ought to follow at all costs.”

“The heart never takes the place of the head: but it can, and should, obey it.”

“Being mature is knowing when to keep quiet.”

“You can’t prove you’re not a child by engaging in childish behavior.”

“Maturity is having someone hurt you more than you ever imagined, but still loving them and not wanting revenge.”

“Maturity, the way I understand it, is knowing what your limitations are.”

Maturity Is When You Realize Quotes

“The best years of your life are the ones in which you decide your problems are your own. You do not blame them on your mother, the ecology, or the president. You realize that you control your own destiny.”

“When you care for others, you manifest an inner strength despite any difficulties you face. Your own problems will seem less significant and bothersome to you. Reaching beyond your own problems and taking care of others, you gain confidence, courage and a greater sense of calm.”

“I live in that solitude which is painful in youth, but delicious in the years of maturity.”

“As I grow older, I pay less attention to what men say. I just watch what they do.”

“When a man is old he must do more than when he was young.”

“It is best to rise from life as from a banquet, neither thirsty nor drunken.”

“Maturity is the ability to postpone gratification.”

“Youth ends when egotism does; maturity begins when one lives for others.”

“I went from adolescence to senility, trying to bypass maturity.”

“Sometimes success will get in the way of maturity – at least temporarily.”

“To make mistakes is human; to stumble is commonplace; to be able to laugh at yourself is maturity.”

“In growing old we become more foolish — and more wise.”

“If you can learn to be patient in a very impatient society, you win.”

“Maturity: to do what’s important and to ignore what’s not.”

Quotes About Maturity In Relationship

“If any human being is to reach full maturity both the masculine and feminine sides of the personality must be brought up into consciousness.”

“I just want to be remembered as a person who loved God, who served others more than he served himself, who was trying to grow in maturity and stability.”

“I’d date someone younger or older; age doesn’t matter to me. Or looks, really – it’s all about maturity.”

“It takes a certain level of maturity to get hit and get knocked down and get back up.”

“Maturity is a bitter disappointment for which no remedy exists, unless laughter could be said to remedy anything.”

“‘Age’ is the acceptance of a term of years. But maturity is the glory of years.”

“Maturity and experience are part of my liberation.”

“I think age is a very high price to pay for maturity.”

“Wisdom is really about figuring the long-term consequences of your actions.”

“Man’s maturity: to have regained the seriousness that he had as a child at play.”

“The first sign of maturity is not reacting to others immaturity.”

Inspirational Quotes About Maturity In Life

“Maturity is when you live your life by your commitments, not by your feelings.”

“We don’t mature through age; we mature in awareness.”

“Caring – about people, about things, about life – is an act of maturity.”

“Maturity is a high price to pay for growing up.”

“Maturity is when you live your life by your commitments, not by your feelings.”

Did you enjoy reading these maturity quotes? If yes, then please share with others too. Also, don’t forget to drop your comment in below comment box.

[Best 120+] Quotes On No Expectations About Life, Love

“Life is rough so you gotta be tough.”