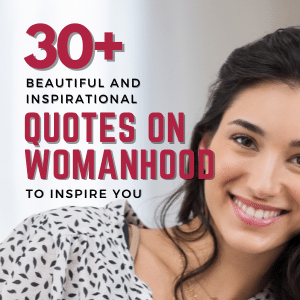 “When we do the best we can, we never know what miracle is wrought in our life, or in the life of another.”

“If you obey all the rules, you miss all the fun.”

“Life is not measured by the number of breaths we take, but by the moments that take our breath away.”

“Always be careful of what you hear about a woman. Rumors come from either a man who can’t have her or a woman who can’t compete with her.”

“Feminism is the radical notion that women are human beings.”

“A woman is like a tea bag; you never know how strong it is until it’s in hot water.”

“The age of a woman doesn’t mean a thing. The best tunes are played on the oldest fiddles.”

“I can hear the roar of women’s silence.”

“I, with a deeper instinct, choose a man who compels my strength, who makes enormous demands on me, who does not doubt my courage or my toughness, who does not believe me naïve or innocent, who has the courage to treat me like a woman.”

Beautiful Quotes On Womanhood Which Will Motivate You

“Above all, be the heroine of your life, not the victim.”

“A girl should be two things: who and what she wants.”

“I always did something I was a little not ready to do. I think that’s how you grow. When there’s that moment of ‘Wow, I’m not really sure I can do this,’ and you push through those moments, that’s when you have a breakthrough.”

“The most courageous act is still to think for yourself. Aloud.”

“No one ever became a success without taking chances… One must be able to recognize the moment and seize it without delay.”

“Find something you’re passionate about and keep tremendously interested in it.”

“The thing women have yet to learn is that nobody gives you power. You just take it.”

“But the most important thing to remember is that every woman is a superhero.”

“Just because you are blind, and unable to see my beauty doesn’t mean it does not exist.”

“I’ve interviewed and portrayed people who’ve withstood some of the ugliest things life can throw at you, but the one quality all of them seem to share is an ability to maintain hope for a brighter morning, even during our darkest nights.”

“I found that ultimately if you truly pour your heart into what you believe in — even if it makes you vulnerable — amazing things can and will happen.”

“The fastest way to change society is to mobilize the women of the world. “

“Define success on your own terms, achieve it by your own rules, and build a life you’re proud to live.”

“I just love bossy women. I could be around them all day. To me, bossy is not a pejorative term at all. It means somebody’s passionate and engaged and ambitious and doesn’t mind leading.”

“Feminism isn’t about making women stronger. Women are already strong. It’s about changing the way the world perceives that strength.”

“You don’t have to be anti-man to be pro-woman.

“Little girls with dreams become women with a vision.”

“A man told me that for a woman, I was very opinionated. I said, ‘For a man, you’re kind of ignorant.’ ”

“I am a feminist. I’ve been female for a long time now. I’d be stupid not to be on own side.”

“We must believe that we are gifted for something, and that this thing, at whatever cost, must be attained.”

“The way in which we think of ourselves has everything to do with how our world see us and how we see ourselves successfully acknowledged by the world.”

“Love is anterior to Life, Posterior to Death, Initial of Creation, and The Exponent of Earth.”

“The question isn’t who’s going to let me; it’s who is going to stop me.”

“To be a woman is to be warbound, knowing all the odds are stacked against you.”

“And listen to me love, when a woman risks her place, her very life to speak a truth the world despises? Believe her. Always.”

“A woman’s happiness is in throwing everything away to live for love.”

“Why, though, does it take a mother, daughter, sister for men to take a woman at her word?”

“This business of womanhood is a heavy burden.”

“A woman is the full circle. Within her is the power to create, nurture and transform.”

“The most effective way to do it, is to do it.”

“If it doesn’t scare you, you’re probably not dreaming big enough.”

“If we do not lift up women and families, everyone will fall short.”

“I don’t know a woman alive who isn’t courageous.”

“If you obey all the rules, you miss all the fun.”

“Forget about the fast lane. If you really want to fly, just harness your power to your passion”

“It’s possible to climb to the top without stomping on other people.”

“The most common way people give up their power is by thinking they don’t have any.”

“And the trouble is, if you don’t risk anything, you risk more.”

Inspirational Quotes In Hindi | Best 50+ Quotes To Transform Your Life

110+ Amazing Quotes About Eyes To Motivate You

111+ Krishna Quotes To Make Your Life Positive And Happy

Health Quotes in Hindi | Top 130+ Powerful Quotes To Motivate Yourself

“For the record, I don’t worship the devil. I just hate religion.”