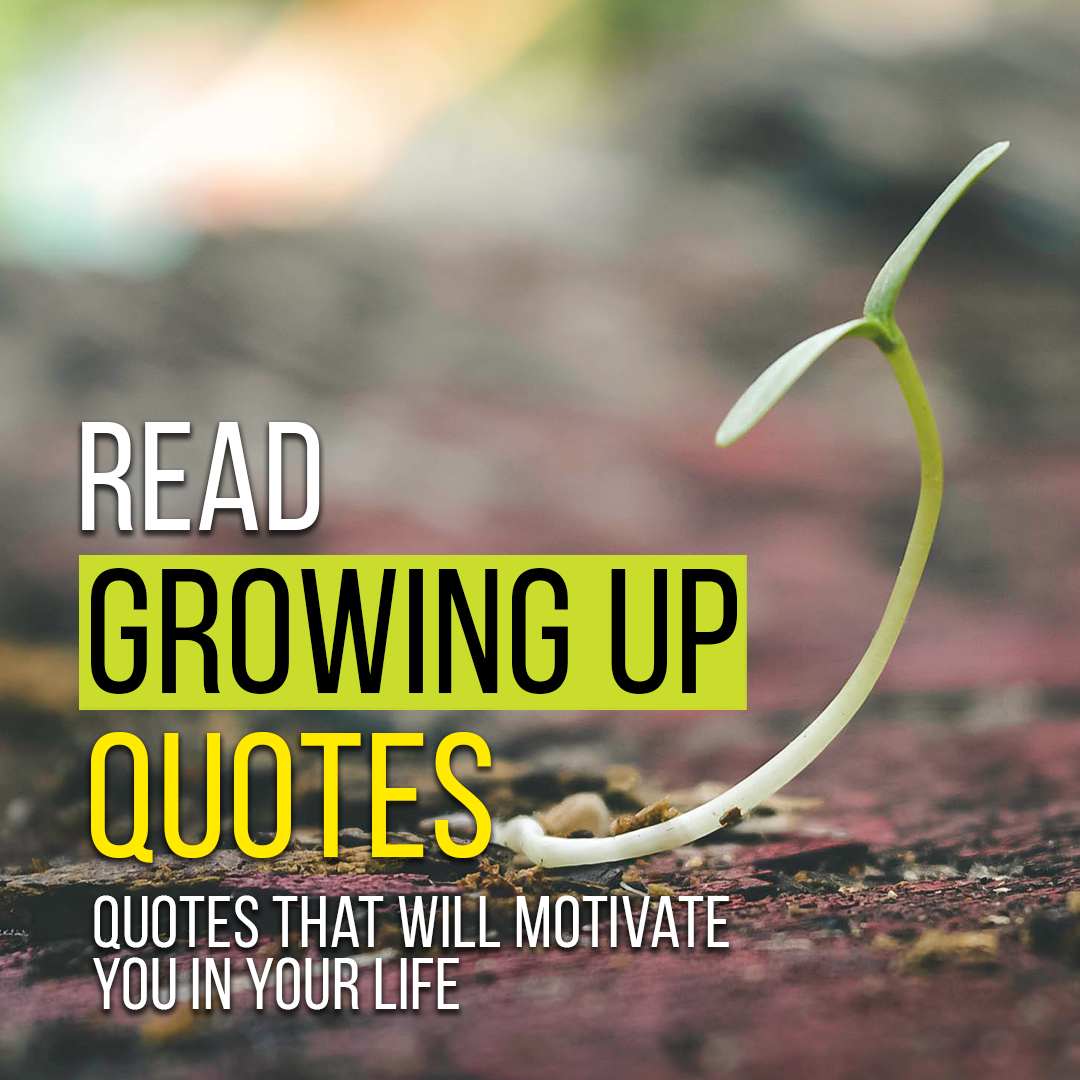 Growing Up Quotes | It is said that we can’t find it when time flies. It is because we humans grow up twice. First, from childhood to old age, we say it is growing up. And the second one when we have to make change, courage, risk, and efforts to grow up to be successful.

In this article, you will read some such quotes related to growing up, which will give you the motivation to grow in your life.

Famous Quotes About Growing Up

“Who rejects change is the architect of decay. The only human institution which rejects progress is the cemetery.”

“All changes, even the most longed for, have their melancholy; for what we leave behind us is a part of ourselves; we must die to one life before we can enter another.”

“When we are no longer able to change a situation, we are challenged to change ourselves.”

“Without accepting the fact that everything changes, we cannot find perfect composure. But unfortunately, although it is true, it is difficult for us to accept it. Because we cannot accept the truth of transience, we suffer.”

“If you don’t like something change it; if you can’t change it, change the way you think about it.”

“It is not necessary to change. Survival is not mandatory.”

“How amazing it is that children grow up in the blink of an eye!!!”

“When kids grow up wanting to be you, you matter.”

“Growing old is mandatory. Growing up is optional.”

“I was the one in charge of the kids growing up.”

“To a father growing old nothing is dearer than a daughter.”

“Motherhood: the days are long but the years are short.”

“Growing up is hard, love. Otherwise everyone would do it.”

“There are two gifts we should give our children, one is roots the other is wings.”

“There are only 940 Saturdays between a child’s birth and her leaving for college.”

“No one tells you that the hardest part of motherhood is when your kids grow up.”

“Growing up is losing some illusions, in order to acquire others.”

“Growing up is such a barbarous business, full of inconvenience and pimples.”

“I regret not having had more time with my kids when they were growing up.”

“There is nothing more special than seeing your kids grow up to be the best person they can be.”

“Sometimes you will never know the value of a moment until it becomes a memory.”

“It happens before you know it, the handprints become higher and higher, and then they disappear.”

“Every child is an artist. The problem is how to remain an artist once we grow up.”

“You are growing into consciousness, and my wish for you is that you feel no need to constrict yourself to make other people comfortable.”

“We grow neither better nor worse as we get old, but more like ourselves.”

“The turning point in the process of growing up is when you discover the core of strength within you that survives all hurt.”

“Age is a necessary but insufficient requirement for growing up. There are immature old people, and there are appropriately mature young people.”

“Parents can only give good advice or put them on the right paths, but the final forming of a person’s character lies in their own hands.”

Quotes About Growing Up – Motivation Quotes

“Some day you will be old enough to start reading fairy tales again.”

“Even though you’re growing up, you should never stop having fun.”

“I think I’m finally growing up – and about time.”

“The trick is growing up without growing old.”

“Don’t try to make me grow up before my time.”

“When will I grow up? How long can I stay a child?”

“In this day and age, some turn 18 and think they’re a man or a woman and that’s it, but that’s just not true. You have to establish your manhood or your womanhood with actions.”

“Don’t grow old to give up and don’t give up growing up.”

“My parents would always tell you that I was the crazy princess growing up. I was a drama queen.”

“My dad said to me growing up: ‘When all is said and done, if you can count all your true friends on one hand, you’re a lucky man.”

“Growing old is mandatory; growing up is optional.”

“Even though you’re growing up, you should never stop having fun.”

“Growing up in any big city, you get exposed to so many beautiful cultures. I’ve grown up with a lot of open eyes around me that’s influenced my eyes to open.”

Some More About Growing Up Quotes

“The older I get, the younger I feel. Growing up, I was always the kid, but I spoke like an adult and was in adult roles. I didn’t feel like a kid. The older I get, I actually feel younger! Which is good. I always thought when you get older, you’ll want to slow down, but I want to do even more.”

“Love does not begin and end the way we seem to think it does. Love is a battle, love is a war; love is a growing up.”

Quotes About Growing Up And Changing

“I always hated my mole growing up. I even thought about having it removed. At the time I didn’t do it because I thought it would hurt, and now I’m glad I didn’t.”

“Lunchtime and recess, that was a big part for me growing up. I think it’s important for kids to have that.”

“My dad encouraged us to fail. Growing up, he would ask us what we failed at that week. If we didn’t have something, he would be disappointed. It changed my mindset at an early age that failure is not the outcome, failure is not trying. Don’t be afraid to fail.”

“Everything will change. The only question is growing up or decaying.”

“When I was a kid growing up, we had a cherry tree in the backyard, 100 years old. I climbed it, and it gave shade in the summertime and excellent cherries in the late summer. Having cherry blossoms around gives the best springtime vibe ever.”

“I grew up on the west side of Detroit – 6 mile and Wyoming – so I was really in the ‘hood. And I would go to school at Detroit Waldorf, and that was not the ‘hood. Growing up in Detroit was good. I had a good perspective, a well-rounded one, and not being one-sided.”

Quotes About Growing Up And Maturing

“I’m Asian-American, and I was the only Chinese girl growing up in a white school in San Diego. So I understood what it was like to be different, to always want to fit in and never feel like you ever could.”

“Artificial intelligence is growing up fast, as are robots whose facial expressions can elicit empathy and make your mirror neurons quiver.”

“I was very different than everybody else growing up. I spoke a different language at home, I ate different food, and I looked different. So I could always relate to Aladdin in that way, being the outcast.”

“Growing up as an Asian American in this society, there were a lot of times where you feel isolated or out of place as an Asian. And growing up in White America, that’s absolutely my experience. And I think that’s why I got into acting because I wanted to be anybody else but Asian.”

“Growing up as a young black girl in Potomac, Maryland was easy. I had a Rainbow Coalition of friends of all ethnicities, and we would carelessly skip around our elementary school like the powerless version of Captain Planet’s Planeteers.”

“Divorce is one of the key predictors of poverty for a child growing up in a home that’s broken.”

“The empty nest comes quickly. Do not squander your most precious privilege of participating in the lives of your children.”

“Cleaning your house while your kids are still growing up is like shoveling the walk before it stops snowing.”

“I think the actual moment of growing up happens when you stop wanting to grow up and start wishing you were a kid again.”

“Growing up happens when you start having things you look back on and wish you could change.”

Sometimes the only way to get over the sadness of your kids growing up is to rest in the beauty of the people they are becoming.”

“One of these days we’re gonna have to grow up, have to get real jobs and be adults, someday, just not today.”

“Must the old joys be evermore withholden?”

“Even their memory keeps me pure and true.”

“Everyone thinks you make mistakes when you’re young. But I don’t think we make any fewer when we’re grown up.”

“Sometimes, life makes you grow up early. And some people never grow up at all.”

“Growing up is such a barbarous business, full of inconvenience. and pimples.”

“Change may come to you in trinkets and I hope it adorns your life gracefully.”

“People and their rituals. They cling to things so hard sometimes.”

“For either or both ways all minds are always.”

“Morning and noon and night, sleeping and waking”

“If your life is a blank page, that only means you have room to write your story. You have the power to tell that story the way you want to.”

Quotes About Children Growing Up

“Growing up is, at heart, the process of learning to take responsibility for whatever happens in your life. To choose growth is to embrace a love that heals.”

“It is only because of problems that we grow mentally and spiritually.”

“Be not afraid of growing slowly, be afraid only of standing still.”

“You won’t remember the way I would hold your little feet in my hands, imagining how much bigger than my own feet they will one day grow, and how I will have to let you go.”

“We spend the first year of a child’s life teaching it to walk and talk and the rest of its life to shut up and sit down. There’s something wrong there.”

“Growing up happens in a heartbeat. One day you’re in diapers; the next day you’re gone. But the memories of childhood stay with you for the long haul.”

“I think she is growing up, and so begins to dream dreams, and have hopes and fears and fidgets, without knowing why or being able to explain them.”

“When raising a child, you never seem to realize that the little person is growing a little more every day. And one day, you see him as a gentleman and be proud of who you have raised.”

“I’ve screwed everything up royally. I remember you saying that growing up happens when you start having things you look back on and wish you could change.”

Best 120+ Inspirational Quotes About Learning From The Past