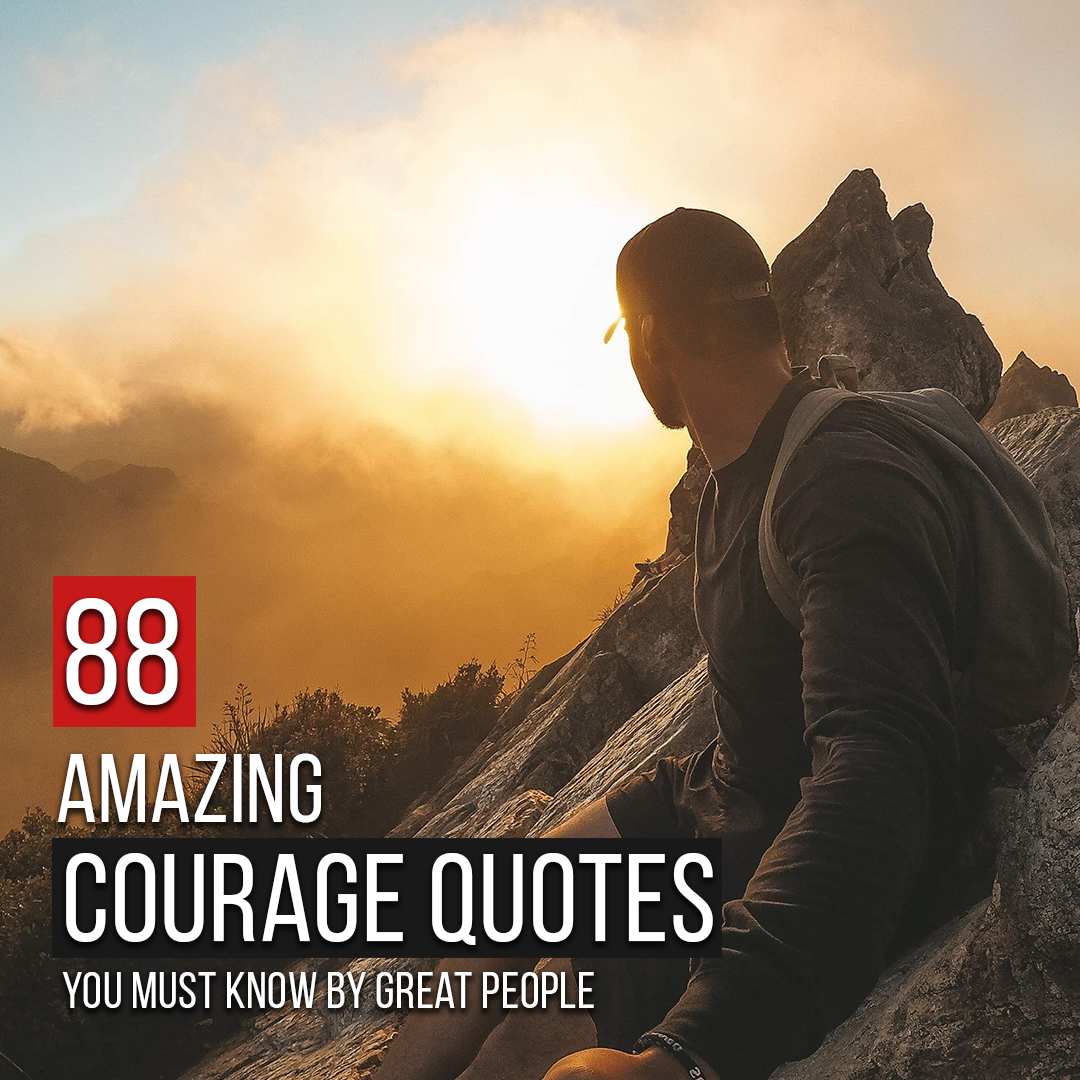 Brave people are not those people who do not afraid of certain things but those who also afraid but still, they move forward. They dare to change society, change the country even if they are getting threatened or getting scared. That’s why courage quotes help to get courage.

If you want to succeed in your life then you should have courage. Courage to speak, to learn new things, to adopt new changes in your life. Without courage, one cannot achieve big dreams in his/her life.

But don’t worry we are here to give you some amazing courage quotes that have been given to us by amazing and great people. They are true example of courage and greatness.

Let’s have a look on some courage quotes by great people.

Amazing Courage Quotes You Must Read

“I believe in getting into hot water; it keeps you clean.”

“The more you are motivated by love, the more fearless and free your action will be.”

“Courage starts with showing up and letting ourselves be seen.”

“Courage means doing what’s right no matter what they say.”

“Courage is the power to let go of the familiar.”

“Courage is seeing too much comfort will make you weak.”

“Of all forms of caution, caution in love is perhaps the most fatal to true happiness.”- Bertrand Russel“The best way out is always through.”

“Courage is not simply one of the virtues but the form of every virtue at the testing point, which means at the point of highest reality.”

“We have to be braver than we think we can be, because God is constantly calling us to be more than we are.”

“Failure is unimportant. It takes courage to make a fool of yourself.”

“Courage is not the absence of fear, but rather the assessment that something else is more important than fear.”

“Efforts and courage are not enough without purpose and direction.”

“Courage is being scared to death, but saddling up anyway.”

Random Courage Quotes You Must Read

“A king is one who fears nothing.”

“The scared freeze. The brave try.”

“All serious daring starts from within.”

“Do one thing every day that scares you.”

“Fear is a reaction. Courage is a decision.”

“What is to give light must endure burning.”

“No man is defeated unless he is discouraged.”

“Never let the fear of striking out get in your way.”

“No captain can do very wrong if he places his ship alongside that of the enemy.”

“Courage is being scared to death but saddling up anyway.”

“We need to wake up from a thought that lasts too long.”

“We need a backbone, not a wishbone.”

“The only tyrant I accept in this world is the ‘still small voice’ within me. And even though I have to face the prospect of being a minority of one, I humbly believe I have the courage to be in such a hopeless minority.”

“Courage is the first of human qualities because it is the quality which guarantees the others.”

Best Quotes About Strength And Courage

“Vulnerability is our most accurate measurement of courage.”

“It’s possible to transcend anything that doesn’t kill you.”

“Don’t let not knowing how it will end keep you from starting.”

“Choose the great adventure of being brave and afraid. At the exact same time.”

“My courage always rises at every attempt to intimidate me.”

“We are all faced with a series of great opportunities brilliantly disguised as impossible situations.”

“Never let the fear of striking out get in your way.”

“No captain can do very wrong if he places his ship alongside that of the enemy.”

“Courage is being scared to death—but saddling up anyway.”

More Courage Quotes To Power You Up

“We need to wake up from a thought that lasts too long.” – Paul Valéry“We need a backbone, not a wishbone.”

“The only tyrant I accept in this world is the ‘still small voice’ within me. And even though I have to face the prospect of being a minority of one, I humbly believe I have the courage to be in such a hopeless minority.”

“What we know matters but who we are matters more.”

“Courage is the first of human qualities because it is the quality which guarantees the others.”

“It takes courage to grow up and become who you really are.”

“You cannot swim for new horizons until you have courage to lose sight of the shore.”

“Courage is found in unlikely places.”

Popular Courage Quotes Which Give You Strength

“Don’t be satisfied with stories, how things have gone with others. Unfold your own myth.”

“No matter how long you train someone to be brave, you never know if they are or not until something real happens.”

“Brilliant thinking is rare, but courage is in even shorter supply than genius.”

“Without courage, wisdom bears no fruit.”

“We could never learn to be brave and patient if there were only joy in the world.”

“With enough courage, you can do without a reputation.”

“He who is not courageous enough to take risks will accomplish nothing in life.”

“Bravery is being the only one who knows you’re afraid.”

“Courage isn’t having the strength to go on – it is going on when you don’t have strength.”

“Courage is grace under pressure.”

Courage Quotes That Will Make You Stronger

“Being deeply loved by someone gives you strength, while loving someone deeply gives you courage.”

“The courage to imagine the otherwise is our greatest resource, adding color and suspense to all our life.”

“We ought to face our destiny with courage.”

“It takes a great deal of courage to stand alone even if you believe in something very strongly.”

“It’s the heart afraid of breaking that never learns to dance.”

“Courage is the hallmark of spirituality. Courage comes when you love yourself for who you are.”

“Courage starts with showing up and letting ourselves be seen.”

“Courage is a learned quality, an acquirable set of skills, a practiced competence.”

“Do you have the courage to act outwardly on what you see inwardly?”

“Through untold courage and sacrifice, America’s veterans have secured the liberty which the founding fathers sought to establish here in the new world.”

“What would life be if we had no courage to attempt anything?”

“Genius is talent set on fire by courage.”

“Have the courage to be who you are, not what people expect you to be.”

“Courage is like love, it must have hope for nourishment.”

“The willingness to show up changes us, It makes us a little braver each time.”

“Being terrified but going ahead and doing what must be done that’s courage. The one who feels no fear is a fool, and the one who lets fear rule him is a coward.”

“Mistakes are always forgivable, if one has the courage to admit them.”

“Never bend your head. Always hold it high. Look the world straight in the eye.”

“If ever you feel like an animal among men, be a lion.”

“Believe you can and you’re halfway there.”

“Man cannot discover new oceans unless he has the courage to lose sight of the shore.”

Loved reading these Courage Quotes? We”ll be happy if you leave your comments below. Also don’t forget to share it with your friends and family.

120+ Attitude Quotes In Hindi For Whatsapp | Check Out Now

Great Lessons You Can Learn From These Democracy Quotes

“I never dreamed about success. I worked for it.”