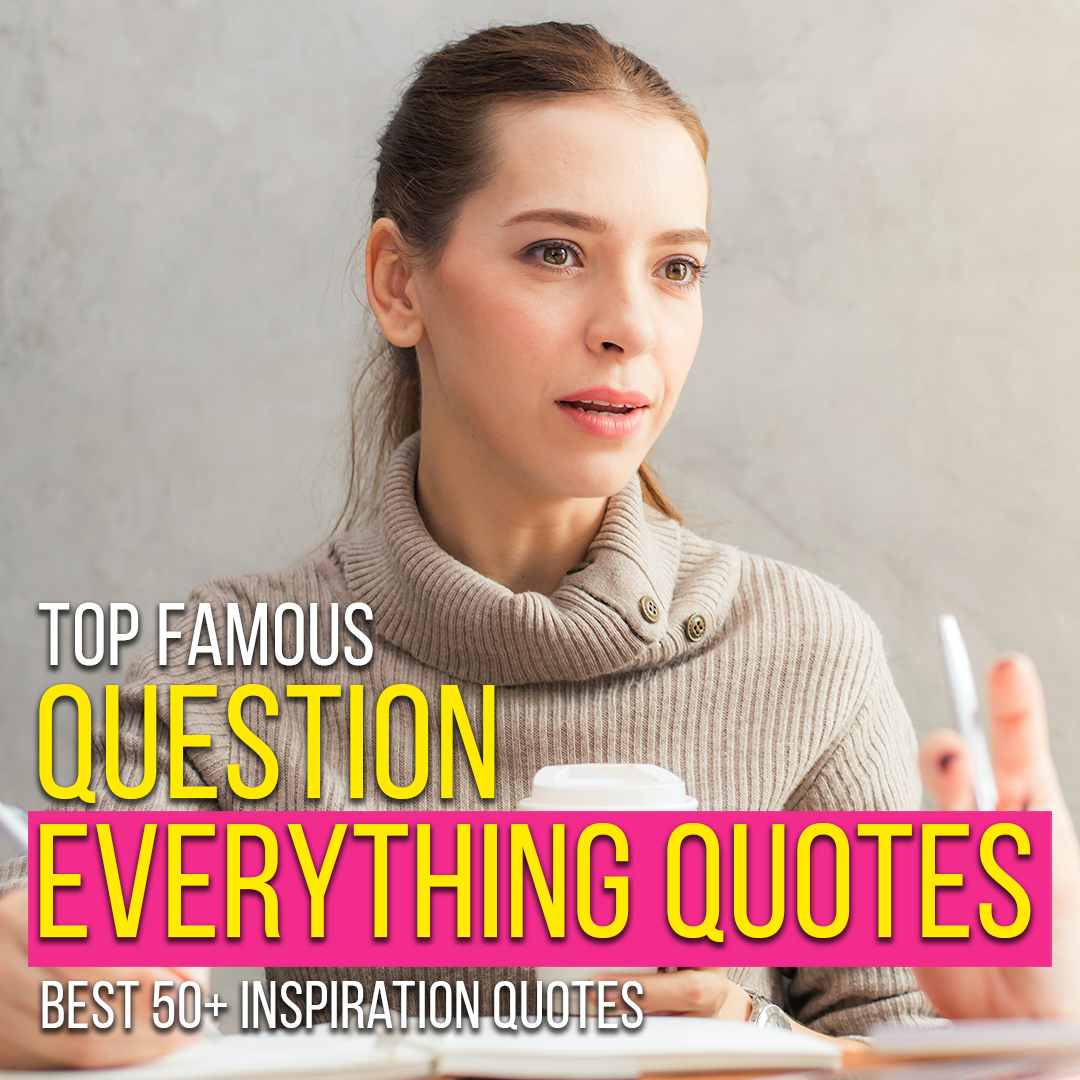 Famous Question Everything Quote | Read and share with your friends these beautiful lines, quotes written by famous people.

“The business of philosophy is to teach man to live in uncertainty… not to reassure him, but to upset him.”

“Attending to your own words and ideas as well as those of others is an admirable trait in any person, but a necessity in a leader.”

“As artists, it is our job to question the rules and ask if they are relevant or outdated, necessary or arbitrary, helpful or oppressive.”

“The important thing is not to stop questioning. Curiosity has its own reason for existing.”

“As you dig your teeth into your assumptions, your teeth become sharper. You can dig deeper. You become what the world needs simply by helping yourself. It’s not easy, but it is worth it. The truth, as they say, hurts. But they also say it sets you free.”

“Questions open a space in your mind that allow better answers to breathe.”

“The moment a person loses the capacity to think, to question, Tanya considers them no longer human but a machine. And that is why the individual Tanya Degurechaff reveres thought, loves debate, and sneers at dogmatism from the bottom of her heart.”

“Everything is possible, but where can I find everything?!”

“Of everything we must first ask: is it real or not?”

“Question everything, including yourself; then redefine it accordingly.”

“Do not believe in anything simply because you have heard it. But after observation and analysis, when you find that anything agrees with reason and is conducive to the good and benefit of one and all, then accept it and live up to it.”

Question Everything Believe Nothing Quotes

“The unexamined life is not worth living.”

“One’s first step in wisdom is to question everything – and one’s last is to come to terms with everything.”

“The most erroneous stories are those we think we know best – and therefore never scrutinize or question.”

“A thought that sometimes makes me hazy: Am I – or are the others crazy?”

“Question everything. Every stripe, every star, every word spoken. Everything.”

“The path to holiness lies through questioning everything.”

“The most important training, though, is to experience life as a writer, questioning everything, inventing multiple explanations for everything. If you do that, all the other things will come; if you don’t, there’s no hope for you.”

“Comedians are sociologists. We’re pointing out stuff that the general public doesn’t even stop to think about, looking at life in slow-motion and questioning everything we see.”

“I had a good time working with Russell Crowe, Ron Howard and Ed Harris. It was a great cast and Russell worked really hard, doing tons of research and questioning everything.”

“Spirituality comes from questioning everything but at the same time accepting everything. You can even be spiritual watching TV. When the ad comes on and says, “Don’t hate me because I am beautiful,” question that.”

Some More Question Everything Quote

“It is important to know that questions are not always meant to be answered. Sometimes, the very question can make a change.”

“And when it comes to the practicality of life, ignorance is usually not a bliss.”

“It is often that the question has a lot more meaning than the answer.”

“The human mind is very unpredictable, and so is the truth of the questions we seek.”

“Understanding a question is half an answer.”

“Question everything. Learn something. Answer nothing.”

“No one is dumb who is curious. The people who don’t as questions remain clueless throughout their lives.”

“Follow the evidence wherever it leads, and question everything.”

“Learn from yesterday, live for today, hope for tomorrow. The important things is not to stop questioning.”

“The important thing is not to stop questioning. Curiosity has its own reason for existing.”

“It’s not that I’m so smart. But I’m with the questions much longer.”

“Assume nothing, question everything.”

Did you find these famous question everything quote inspirational? If yes, then share with others too. Also, don’t forget to drop your comments in below comment box.

“A man is not complete until he has seen the baby he has made.”