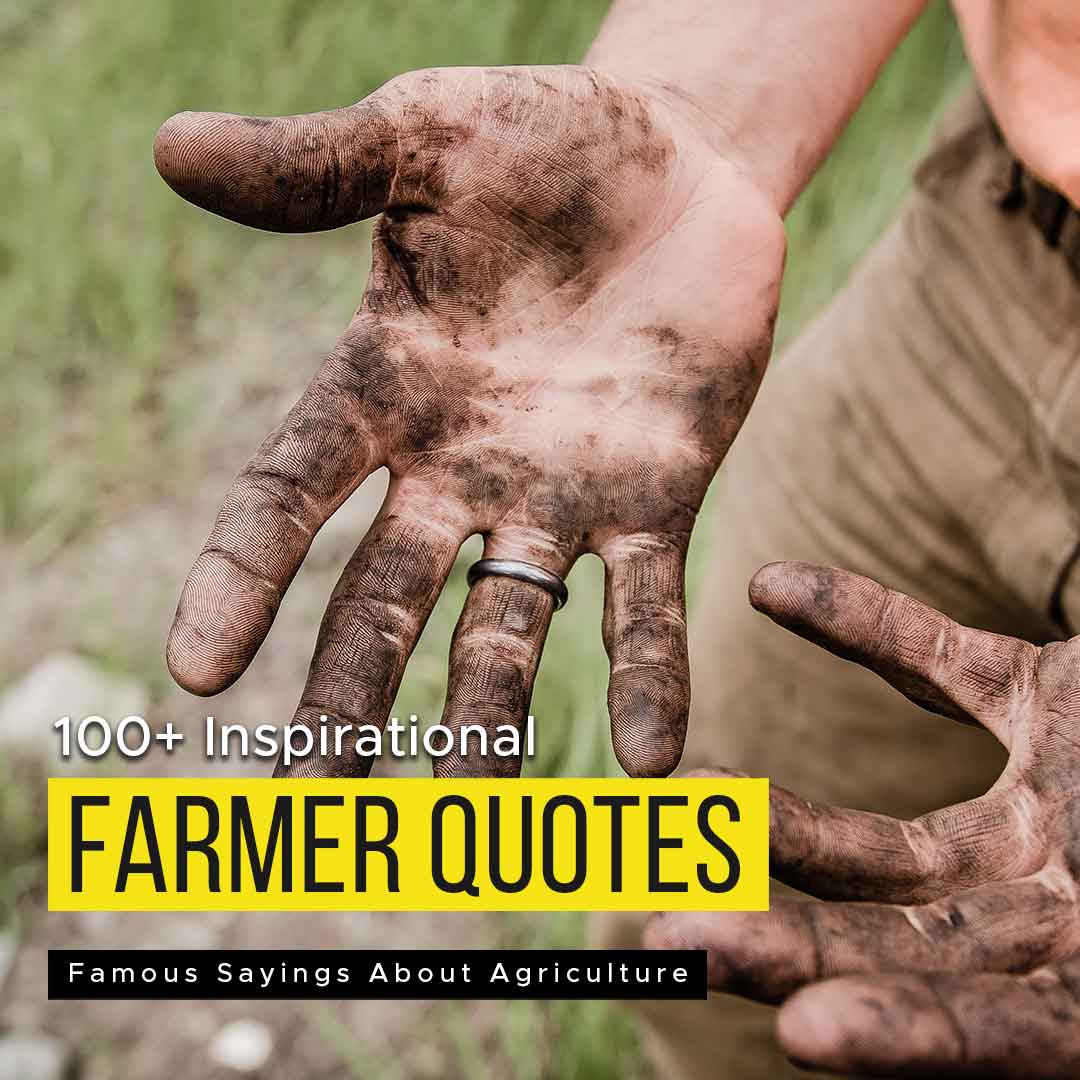 Inspirational Farmers Quotes | If you have food on your plate, thanks to the farmer, and if you are eating the food comfortably, thanks to the soldier.

Be it a farmer or a soldier. The responsibility of the whole country rests on the shoulders of both of them. Can you imagine your life without these two? Never.

But unfortunately, we do not give as much respect to the farmer and soldier as we should. Some countries get many facilities and benefits, but they do not get much value in some countries. This is a very shameful and wrong thing.

In this article, we will take a look at some quotes related to the farmer.

farmers quotes you must read

“Agriculture is our wisest pursuit because it will in the end contribute most to real wealth, good morals, and happiness.”

“The ultimate goal of farming is not the growing of crops, but the cultivation and perfection of human beings.”

“Agriculture is the noblest of all alchemy; for it turns earth, and even manure, into gold, conferring upon its cultivator the additional reward of health.”

“Farming is a profession of hope.”

“A reasonable agriculture would do its best to emulate nature. Rather than change the earth to suit a crop it would diversify its crops to suit the earth.”

“If you tickle the earth with a hoe she laughs with a harvest.”

“My grandfather used to say that once in your life you need a doctor, a lawyer, a policeman, and a preacher. But every day, three times a day, you need a farmer.”

“Agriculture is our wisest pursuit, because it will in the end contribute most to real wealth, good morals, and happiness.”

“When tillage begins, other arts follow. The farmers, therefore, are the founders of human civilization.”

“No race can prosper until it learns there is as much dignity in tilling a field as in writing a poem.”

“As long as there’s a few farmers out there, we’ll keep fighting for them.”

“You know, farming looks mighty easy when your plow is a pencil, and you’re a thousand miles from the corn field.”

“Do what you love to do, and be around things that make you smile. The cows make me smile every day.”

“The farmer has to be an optimist or he wouldn’t still be a farmer.”

“Farming is a profession of hope.”

“The goal of any farmer, after producing enough to feed his own family, has always been to find the best place to sell the year’s crop.”

“Strong communities are built around local, real food. Food we trust to nourish our bodies, the farmer and planet.”

“There are only three things that can kill a farmer: lightning, rolling over in a tractor, and old age.”

“We’ve got this cultural mentality that you’ve got to be an idiot to be a farmer.”

“I love the idea of farm to table and farmer’s markets. I enjoy a meal more if I know I’m eating something that’s good quality and good for me.”

“When I help a farmer, I don’t differentiate between them based on their region, as farmers have no borders. I want to live like a world citizen and react like a human being.”

“I never wanted to become an actor. I always wanted to be a farmer and dreamt of owning half an acre of agriculture land.”

“I inherited that calm from my father, who was a farmer. You sow, you wait for good or bad weather, you harvest, but working is something you always need to do.”

“In the summer, I love to go up north to a cottage and relax by the lake, swim, go canoeing… I also love riding my bike around Toronto, going to the farmer’s market, cooking. That sounds simple, but it’s a luxury you don’t have when you’re living in hotels.”

“My father was a farmer, and we have had some farming land in Haryana. Maybe I would have followed his footsteps and become a farmer.”

“Farming isn’t something that can be taught. Each plant tells its own story that has to be read repeatedly.”

“The man who sows wrong thoughts and deeds and prays that God will bless him is in the position of a farmer who, having sown tares, asks God to bring forth for him a harvest of wheat.”

“I can’t do heels – I look like a cowboy in drag. I’ve a terrible gait, and I’m more at home in wellies, riding boots or trainers. With my dad being a farmer, I was raised in a welly.”

“I am a ball player in the summer and a farmer in the winter time, and I aim to be a success at both professions.”

“Everybody had to go to some college or other. A business college, a junior college, a state college, a secretarial college, an Ivy League college, a pig farmer’s college. The book first, then the work.”

“At the time the world was all upside down. The American people were beginning to move around a lot. The old hometown ties had been pretty much broken. The theme of Farmer Takes a Wife appealed to people. Everybody was homesick. And it sold and sold and sold.”

“I buy my produce at the local farmer’s market, which is actually cheaper than shopping at the grocery store.”

“I’ll go grocery shopping at the farmer’s market on a Sunday and already know what I’m going to cook for the next two, three or four days.”

“My grandfather was a very elegant individual. My father also. He was a lawyer and farmer in Cuba. In Miami, he had to go to work wherever he could. But whenever it was time to go out, you saw how they cared for how they looked.”

“Plaid is always cute and always will be. But only on the bottom. At the top, it makes you look like a farmer.”

“Who do you call a civilian in a guerilla war? I mean, it might be a farmer by day or a merchant, a housewife, and by night the housewife may be helping to make landmines and booby traps and who knows.”

“The farmer doesn’t care for the pitchers’ battle that resolves itself into a checkers game. The farmer loves the dramatic, and slugging is more dramatic than even the cleverest pitching.”

“I never do what anyone else is doing. I could walk away from music and become a farmer or do some crochet. The worst thing in life for me is to do something I’m not happy doing.”

we must respect farmers | don’t miss these quotes

“We’ve got nine generations of farmers in my family, in Warwickshire. And I do feel connected to being a farmer’s son. There was a time when I didn’t, when I rebelled against it, but there’s certainly that sort of work ethic within me.”

“Just as we would have no need of the farmer’s labor and toil if we were living amid the delights of paradise, so also we would not require the medical art for relief if we were immune to disease, as was the case, by God’s gift, at the time of Creation before the Fall.”

“A farmer travelling with his load Picked up a horseshoe on the road, And nailed if fast to his barn door, That luck might down upon him pour; That every blessing known in life Might crown his homestead and his wife, And never any kind of harm Descend upon his growing farm.”

“I can support co-ops if they want to do it as we’ve known co-ops in America for 150 years – where they serve the purposes of the consuming public, whether it’s health care or whether it’s co-ops as we know them in the Midwest, providing electricity or to sell supplies to farmer.”

“As the Republican platforms says, the welfare of the farmer is vital to that of the whole country.”

“Life on a farm is a school of patience; you can’t hurry the crops or make an ox in two days.”

“There is no time in modern agriculture for a farmer to write a poem or compose a song.”

“Even if a farmer intends to loaf, he gets up in time to get an early start.”

“Those too lazy to plow in the right season will have no food at the harvest.”

“I know there’s a farmer out there somewhere who never wants a PC and that’s fine with me.”

“I’m still a farm boy at heart. If I hadn’t suffered from asthma as a child, I would be a farmer today.”

“I did Lassie for six years and I never had anybody come up to me and say, ‘It made me want to be a farmer.'”

“I’m a farmer with a mandolin and a high tenor voice.”

“A photographer without a magazine behind him is like a farmer without fields.”

“I briefly did therapy, but after a while, I realised it is just like a farmer complaining about the weather. You can’t fix the weather – you just have to get on with it.”

“I wanted to be a farmer’s wife. I thought it would be quite fun to wake up of a morning, collect eggs and have sheep and pigs as pets. I know now that it would also involve having to sleep with the farmer, but at the time I wasn’t thinking about the sexual implications – I was 11.”

“If we as a society are willing to have a preference for organic food, the farmer can pass on the savings.”

“My dream is to become a farmer. Just a Bohemian guy pulling up his own sweet potatoes for dinner.”

“My feeling was, you plant some seeds. If they grow, great; if they don’t, you don’t take it personally. Not my problem; I just kept planting. Just like a farmer.”

“I’ve always said I want a farmer, not a hunter. Hunters go for the kill and they move on. A farmer nurtures; he watches things grow.”

“Agriculture is the foundation of manufactures, since the productions of nature are the materials of art.”

“It is impossible to have a healthy and sound society without a proper respect for the soil.”

“When tillage begins, other arts follow. The farmers, therefore, are the founders of human civilization.”

“The master’s eye is the best fertilizer.”

“A good farmer is nothing more nor less than a handy man with a sense of humus.”

“Farming looks mighty easy when your plow is a pencil and you’re a thousand miles from the corn field.”

“There are two spiritual dangers in not owning a farm. One is the danger of supposing that breakfast comes from the grocery, and the other that heat comes from the furnace.”

“The discovery of agriculture was the first big step toward a civilized life.”

“Agriculture engenders good sense, and a good sense of an excellent kind.”

I hope you’ve liked these quotes on farmers. If yes, then please share this article with your friends too. Also, share your comments too in comment section below.

Want To Know How Ego Can Affect You? Read These Quotes

“In this bright future you can’t forget your past.”