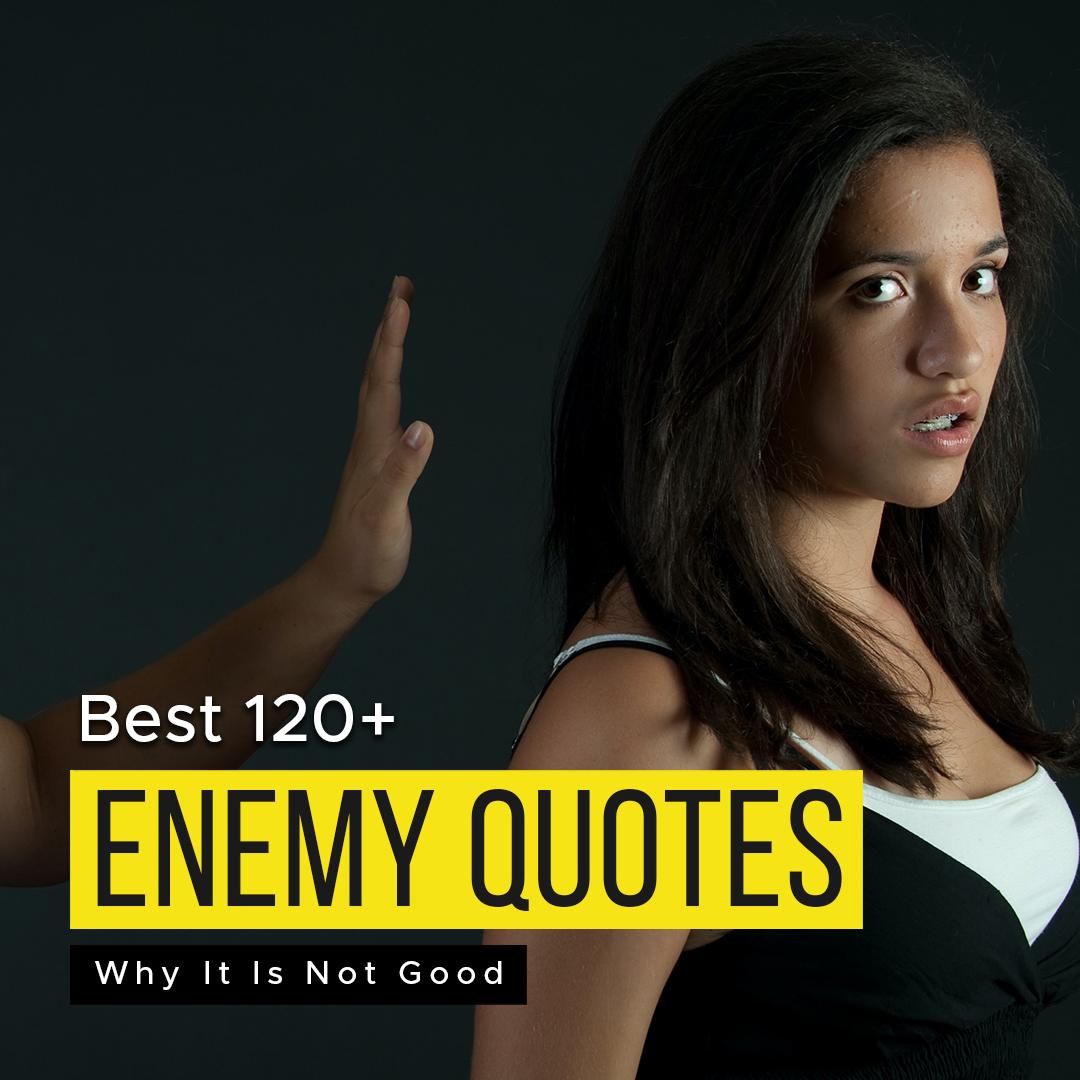 Enemy Quotes With Images | By the way, it is not a good thing to to make someone your enemy. But this is something that we do not control. No matter how good we are from the heart, we still have enemies because everyone has their own thinking.

In this article we will read some enemy quotes.

“Never interrupt your enemy when he is making a mistake.”

“Corruption is the enemy of development, and of good governance. It must be got rid of. Both the government and the people at large must come together to achieve this national objective.”

“It was my duty to shoot the enemy, and I don’t regret it. My regrets are for the people I couldn’t save: Marines, soldiers, buddies. I’m not naive, and I don’t romanticize war. The worst moments of my life have come as a SEAL. But I can stand before God with a clear conscience about doing my job.”

“FOMO (Fear of Missing Out) is the enemy of valuing your own time.”

“Surround yourself with the right people, and realize your own worth. Honestly, there are enough bad people out there in the world – you don’t need to be your own worst enemy.”

“Action is consolatory. It is the enemy of thought and the friend of flattering illusions.

“A bullet can kill the enemy, but a bullet can also produce an enemy, depending on whom that bullet strikes.

Quotes For Enemies And Haters

“Firstly you must always implicitly obey orders, without attempting to form any opinion of your own regarding their propriety. Secondly, you must consider every man your enemy who speaks ill of your king; and thirdly you must hate a Frenchman as you hate the devil.”

“Time is your friend; impulse is your enemy.”

“Time is my greatest enemy.”

“Man has no greater enemy than himself.”

“We must all build national unity, build all revolutionary forces, into one powerful wave to sweep away our main enemy, political imperialism and economic imperialism.”

“Governments regard their own citizens as their main enemy, and they have to be – protect themselves. That’s why you have state secret laws. Citizens are not supposed to know what their government is doing to them.”

“The totalitarian, to me, is the enemy – the one that’s absolute, the one that wants control over the inside of your head, not just your actions and your taxes.”

“In all matters of opinion, our adversaries are insane.”

“The nearest I can make it out, “Love your Enemies” means, “Hate your Friends”

“Never interrupt your enemy when he is making a mistake.”

“It takes your enemy and your friend, working together to hurt you to the heart; the one to slander you and the other to get the news to you”

“Man usually avoids attributing cleverness to somebody else unless it is an enemy.”

“I have met the enemy, and it is the eyes of other people.”

“It is easy enough to be friendly to one’s friends. But to befriend the one who regards himself as your enemy is the quintessence of true religion. The other is mere business.”

“Never explain―your friends do not need it and your enemies will not believe you anyway.”

“The man of knowledge must be able not only to love his enemies but also to hate his friends.”

“Your friends will believe in your potential, your enemies will make you live up to it.”

“A wise man gets more use from his enemies than a fool from his friends.”

“There’s ways you can trust an enemy you can’t always trust a friend. An enemy’s never going to betray your trust.”

“When a sinister person means to be your enemy, they always start by trying to become your friend”

“The art of war teaches us to rely not on the likelihood of the enemy’s not coming, but on our own readiness to receive him; not on the chance of his not attacking, but rather on the fact that we have made our position unassailable.”

“It is a simple but sometimes forgotten truth that the greatest enemy to present joy and high hopes is the cultivation of retrospective bitterness.”

“Men are not the enemy, but the fellow victims. The real enemy is women’s denigration of themselves.”

“And by the way, everything in life is writable about if you have the outgoing guts to do it, and the imagination to improvise. The worst enemy to creativity is self-doubt.”

“We now have to see our country surrender to the enemy without demonstrating our power up to 120 percent. We are now on a course for a humiliating peace – or, rather, a humiliating surrender.”

“We need a common enemy to unite us.”

“A friend is nothing but a known enemy.”

“If fear is the great enemy of intimacy, love is its true friend.”

“God instructed Nehemiah to build a wall around Jerusalem to protect its citizens from enemy attack. You see, God is not against building walls!”

“Concentrated power has always been the enemy of liberty.”

“There is no more sombre enemy of good art than the pram in the hall.”

“The enemy of the modern woman is not women who like fashion or are writing about it. The enemy is stereotypes that come from all places and that tell you to be one way or the other. The enemy is really real sexist people, like Todd Akin, and people who are violent against women physically or sexually.”

“Men weren’t really the enemy – they were fellow victims suffering from an outmoded masculine mystique that made them feel unnecessarily inadequate when there were no bears to kill.”

“I’m either my best friend or my worst enemy.”

“The essence of optimism is that it takes no account of the present, but it is a source of inspiration, of vitality and hope where others have resigned; it enables a man to hold his head high, to claim the future for himself and not to abandon it to his enemy.”

“Love your enemies because they bring out the best in you.”

“I need new enemies the old ones are beginning to like me.”

“I thank all my enemies, it is because of their challenge that today I am where I am.”

“Remember that nobody will ever get ahead of you as long as he is kicking you in the seat of the pants.”

“The best way to get along is never to forgive an enemy or forget a friend.”

“Take the stones people throw at you, and use them to build a monument.”

“Kill them with success, and bury them with a smile.”

“Always pray for your enemy, because he is the best reformer for you.”

“I don’t get mad I get even several times.”

Hanging With The Enemy Quotes

“If you know the enemy and know yourself you need not fear the results of a hundred battles.”

“Smile and grow in front of your haters. It kills them.”

“Pretend inferiority and encourage his arrogance.”

“If you want to drive your enemy mad, all you have to do is to forgive him.”

“The supreme art of war is to subdue the enemy without fighting.”

“You are my enemy, as I am yours, but even enemies can show respect.”

“Attack is the proof that your enemy anticipates your success.”

“Pay close attention to people who don’t clap when you win.”

“Friends and enemies have a lot in common, you will never know when they will slaughter you.”

“I keep my head held high and smile, because there are people who will kill to see me fall.”

“An enemy generally says and believes what he wishes.”

“A man who lies about beer makes enemies”

“If you have enemies, good that means you stood up for something.”

“Staying silent is like a slow-growing cancer to the soul and a trait of a true coward. There is nothing intelligent about not standing up for yourself. You may not win every battle. However, everyone will at least know what you stood for—YOU.”

“Never annoy an inspirational author or you will become the poison in her pen and the villain in every one of her books.”

Some Random Quotes On Enemy

“It doesn’t take but a few words to turn your best friend into your worst enemy.”

“If every mortal looks at others as their friends, not as their enemies, the world would be a much better place, wouldn’t it?”

Loved these enemy quotes? If yes, then share with others too. Also, don’t forget to drop your comments in below comment box.

Best 120+ Inspirational Quotes About Learning From The Past

“His little hands stole my heart. His little feet ran away with it”